Despite all the theatre I see, I have somehow always managed to avoid The Royal Court. Not particularly by design - although their decision some years ago to stage the new Jez Butterworth they had, starring Dominic West, in their upstairs dining room of a studio space did make me hate them for quite some time - but more because their programming didn’t seem that interesting to me.

The Ferryman rather changed that impression and since seeing that in its West End transfer I’ve been looking for something (that it was possible to get tickets for) to see in the venue itself. Instructions for Correct Assembly is the production I settled on, motivated purely by the desire to see Mark Bonnar - whose gloriously caustic and fucked up character in Channel 4’s sublime Catastrophe is my spirit animal in many ways - on stage. 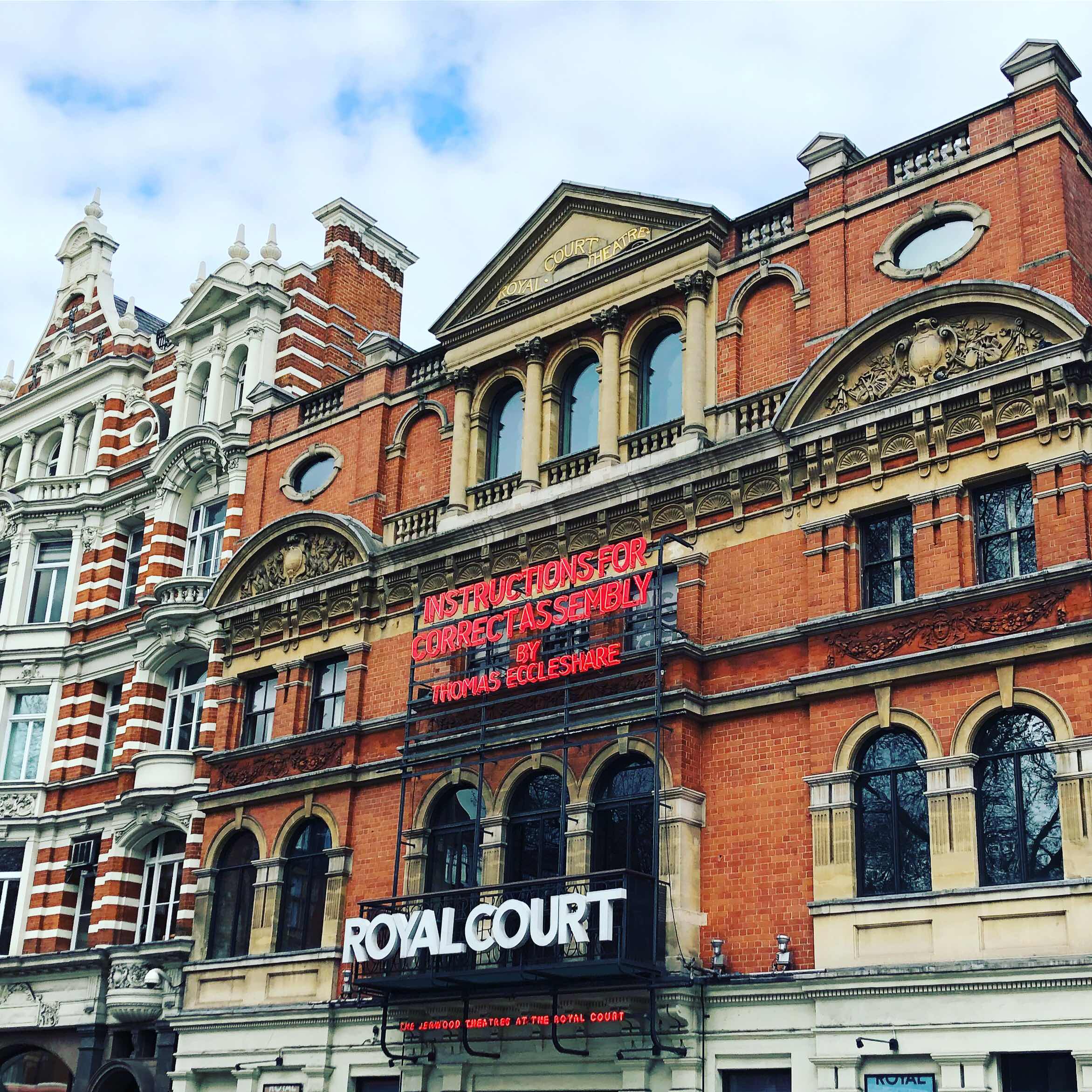 Written by Thomas Eccleshare, Instructions tells the story of a couple trying to build their perfect son from a flatpack kit after their imperfect real one dies of a drug overdose. Egged on by a desire to Keep Up With the Joneses with their neighbours, whose overachieving brood their parents are vomit inducingly obsessed with, they are horrified when the robot perfect son turns out to be just as messed up as the real one. Quelle surprise.

There’s no prizes for spotting the point this piece is trying to make: that perfection is impossible, or at least a relative concept, and that the quest for it is damaging for all concerned. And there’s of course absolutely nothing wrong with making that point. It’s entirely valid and completely true. But it’s not as interesting or clever as I think this play thinks it is. It doesn’t really sustain the action for the hour and forty minutes that this production demands, especially as the narrative premise is so out there and the production is so stylised.

That said, it is an entertaining piece of writing. It’s very well observed and has enormous wit and heart. The scenes of the perfect son being built are really fun; contrasted with the scenes of the breakdown of the relationship between parents and drug addict real son they become something much darker. There are plenty of genuinely laugh out loud moments, such as when the couple are adjusting the settings on perfect son’s political views to suit their own tastes. Rather like an Alan Ayckbourn play though, once you realise what you’re actually laughing at things become something more complex. It’s not a bad play by any means, it’s just not as clever as it thinks it is.

The same goes for the production, and to a much greater degree. There are creative decisions that have been taken here that are just annoying - the what I assume are supposed to be robotic movements (weird jumping around) of the cast to get in and out of scenes is the worst offender. It’s unnecessary and, worse, pretentious in exactly the way that the Royal Court’s detractors claim this theatre always is. The conveyor belt set trick is neat but overused, as is the use of a sort of grey panel with a hole in the middle to frame some of the action. It’s also too long by a good ten minutes. There’s no dramaturg credited in the programme, I feel like there needed to be one. I enjoyed Jack Knowles’ lighting design though and Illusionist (great job) Paul Kieve has done some fantastically fun things in creating a ‘real’ robot out of, I think, bits of genuine robotics and the IRL actor. Again, it’s not a bad production. It’s just not as good as it thinks it is.

Given what motivated me to see the show in the first place though, I’m relieved to say that the acting is really great and wholly justified the price of my £20 ticket. Mark Bonnar is, thankfully, on top form as dad Harry, dealing equally well with the comedy and sadness in the play. Jane Horrocks is even stronger as mum Max, pleasingly hard edged for a dramatic mother. Pick of the bunch though is Brian Vernell as both robot son Jan and human son Nick. He has a lot of work to do on his double duty but manages to create distinct, complex and sympathetic characters in both guises. I really enjoyed watching him and will definitely look out for him in more stuff. It’s always fun to go to the theatre to see a particular actor but then have another, younger, actor impress you instead.

So I wasn’t mad about Instructions for Correct Assembly. It’s by no means a bad play or a bad production; if you go just to be entertained for a bit you’re unlikely to be disappointed. The cast is worth seeing, even if the play and the production aren’t quite as strong. I can’t say this show has turned me into a Royal Court devotee (to be honest, I didn’t find it a particularly welcoming or comfortable venue either - and who upholsters theatre seating in fucking leather, the noisiest material known to man?) but neither does it mean I’m swearing off them for good. It’s certainly not a perfect production, which I suppose is entirely appropriate.

Instructions for Correct Assembly runs in the Jerwood Downstairs at The Royal Court until 19th May.