As unusual theatre propositions go, a black comedy of manners, set in a domestic violence refuge and staged above a somewhat out of the way pub in Clapham is up there for me. Still since all of the good TV seemed to finish last week I needed something to fill my Wednesday night, and so here we are. 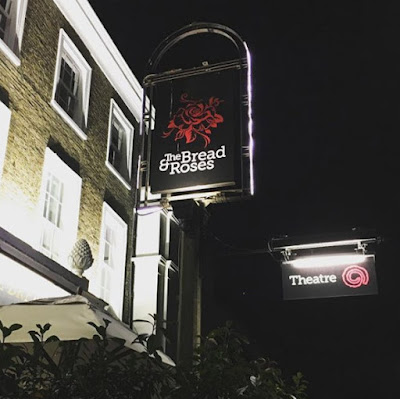 The somewhat out of the way pub in Clapham in question is the Bread and Roses whose upstairs theatre is celebrating its third year with The Black Eye Club, a new play by Phil Charles which recently won the theatre’s playwright award. It tells the story of Dave (gay, shy, repressed, alcoholic accountant with a degree and a savings account) and Zoe (straight, loud, working class with a council house) and their meeting at a refuge whilst fleeing their abusive partners. It’s a great premise and this cracking little play delivers on it with panache.

This is a play that is not afraid to wear its politics on its sleeve and shows the damage that austerity is doing to local government budgets really effectively - an area that for all the political plays around at the moment doesn’t seem to be glamourous enough for most playwrights to explore, despite its very real and sometimes devastating effects on so many aspects of life for so many people. It’s not surprising to read in Charles’ biography that he has direct experience of working with local government and the play is immaculately researched with shocking, though depressingly unsurprising, detail (domestic violence refuges are being outsourced to private security firms like G4S because of course they are).

Both the plot and the characters generally feel very real and very rounded though there are moments, especially with Zoe, that feel a tiny bit lazy and stereotyped; an occasional line of dialogue for her which feels a bit like it was rejected from Eastenders. The plot and the characters’ experiences though ring depressingly true and the points about opportunity and education that Charles uses the contrast between Dave and Zoe to make are done really well. Charles works hard to wring humour from the situation too, and largely succeeds in a wry and knowing sort of way. The biggest feather in the cap of the writing though is the twisty turny last fifteen minutes which are shocking, unpredictable and uplifting and go off in a variety of directions that I really didn’t expect. It’s so rare for a play to have a twist that’s genuinely unforeseen and this one has several. It’s really clever.

Given the constraints of the space and the facilities, the production is strong too. The lighting and incidental music are well used, the set works really well and makes intelligent use of its lack of solid walls and the use of the actual performance space as a whole is effective, using a thrust stage and making sensible use of the main entrance door as an extra bit of set. Tessa Hart’s direction is quick and uncontrived and the choreography is fab, vital to make this story work on a very small stage.

The cast of three are also much to the production’s credit. Christopher Sherwood is my pick of the bunch as the damaged, repressed but ultimately inspiring Dave. His quiet diffidence makes for a very believable and tragic performance. Rebecca Pryle is a hugely sympathetic, likeable and credible Zoe who, when final allowed to do some of the dramatic heavy lifting rather than the knockabout comedy towards the end of the play, really pulls it off. Cathryn Sherman takes what could be a bit of a nothing part, as security guard Sharon, and brings some humanity and edge to it (and I really like Charles’ writing for her and the way he uses her to show that even the people in positions of relative privilege and power in the current local government funding mess are still trapped by it).

Overall, The Black Eye Club is a great little thing; thought provoking, enraging, sad, happy and funny all at the same time. It certainly wouldn’t surprise me to see this piece having a future life in bigger - and more purpose built! - venues. I would certainly be interested to see it in one if it did.

The Black Eye Club is at the Bread and Roses Theatre until 18th November.