"Sort of a rom com. There might be some torture." is the sort of plot summary that I am here for. Other things that I am here for include the idea of Queen Victoria wearing Nike Air Max and Prince Albert in a baseball cap. All of these things appeal to me.

I'm back at the National Youth Theatre - if the Air Max didn't give it away - this time ensconced in the Soho Theatre (cool young person central, an excellent marriage of venue and company) for one of their REP Company's new ones, Victoria's Knickers. Stop laughing at the back. Written by NYT alumus Josh Azouz, Victoria's Knickers tells the true-ish story of Ed Jones, a Kilburn lad who breaks into the Palace, meets Victoria and forms something of a relationship with her. 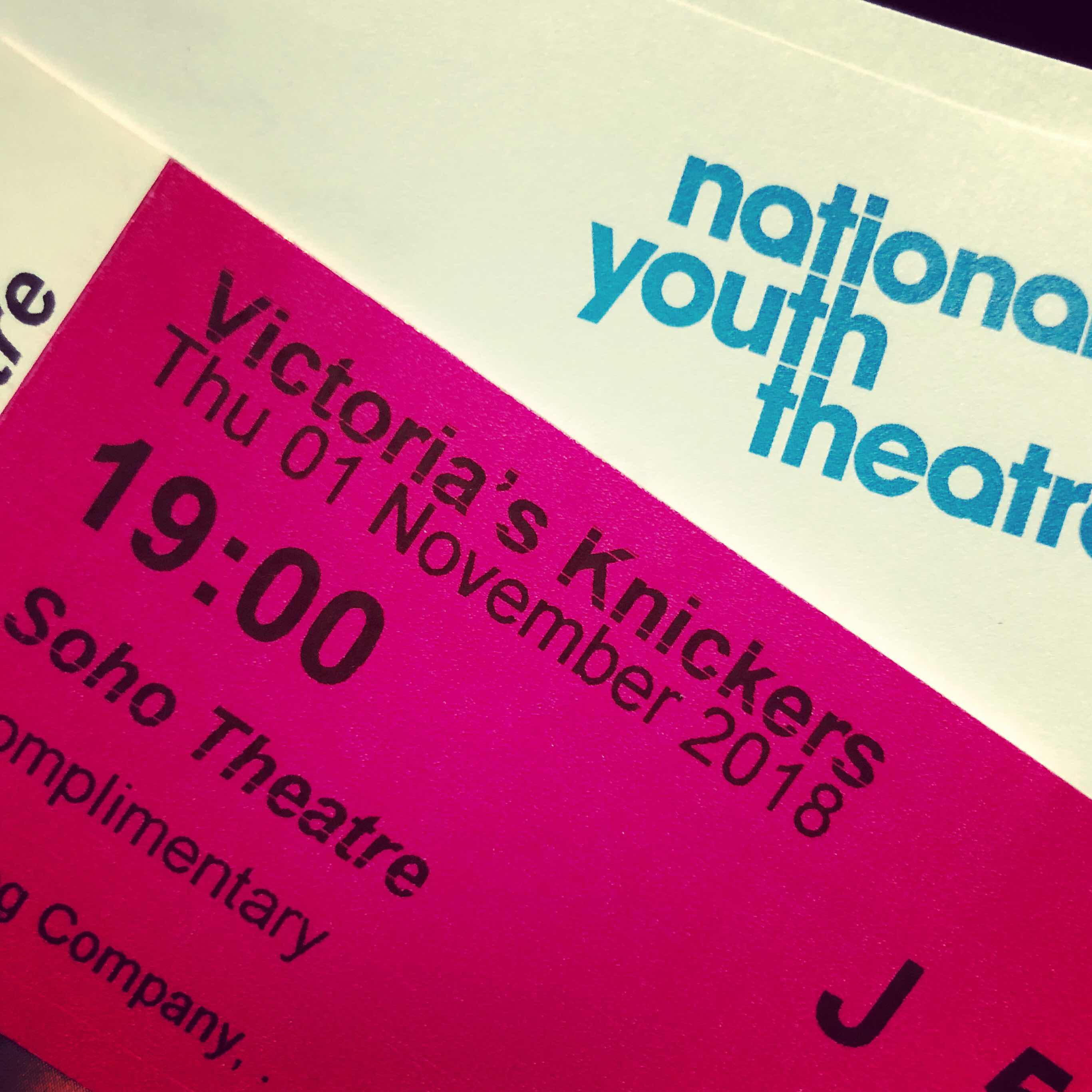 The play-with-songs itself is a sort of absurdist Hamilton (hip hop history musicals are at risk of becoming a bit boring I fear), which weaves the story of Ed and Victoria with the wider tale of what was happening in Britain at the time - specifically the Chartists. It doesn't achieve this blend all that well for my money, it would be far better sticking with the torture rom com. Chris Cookson's music is hit and miss and the plot, whilst intentionally kind of all over the place, just doesn't quite hang together. The best description might be Hamilton meets An Octoroon. It very much has the crazy vibe of the latter, if not the strength of writing to entirely pull it off.

There's may be a very good reason why it has An Octoroon vibes: it has the same director, the excellent Ned Bennett (also ex-NYT) on great form again here. He brings an enormous sense of fun to everything and an admirable, entirely hands off, sense of 'just get on with it really lads'. I love his style, he is king of this sort of madness. Hannah Wolfe's eye catchingly non-existent design - I've not seen so much MDF in one place since Changing Rooms was a thing (I appreciate this joke is 100% NYT non-compliant) - and Jess Bernberg's ballsy, exceptionally bright lighting nicely compliment the action without ever threatening to pull focus from it. The sort of design that you don't really even notice, which I do mean as a compliment.

I sort of don't care about any of this though because, as I've said before, the joy of seeing an NYT production is the NYT itself. I love this company, even as they make me feel so very tired with their hijinx. And I'm pretty sure I would not have enjoyed this play as much as I did were it being performed by a cast with less youthful exuberance (for want of a less patronising phrase) and less 'zero fucks given' swagger. They utterly throw themselves into the madness of the play as if it's entirely normal, for example, to be playing out a human cockfight in street clothes but wearing a chicken mask. It's just great fun to watch them have fun.

If you're looking for ones to watch this cast has many. In the title role Alice Vilanculo is brilliant, strutting around in her Air Max like she owns the place because she does. Jamie Ankrah is an excellent foil for her, as Ed, and is endlessly watchable in his own right. Oseloka Obi almost steals it from both of them as Prince Albert (his No Diggity routine is the stand out moment of the show, hands down) and if he is not playing Aaron Burr at some point in the reasonably foreseeable future then there is really no justice. Simran Hunjun has the pick of the vocals and there's nice work in a relatively small role from Christopher Williams as a Chartist with a gorgeous Welsh lilt (his Spiderman vs Black Panther fight with Prince Albert, yes really, is great fun).

I'm not going to claim that Victoria's Knickers is the best or most memorable play I've ever seen. But, as ever, the NYT take something a bit meh and make it joyous. A shot of espresso to the heart of even the most cynical theatregoer.

Victoria's Knickers is at the Soho Theatre until 10th November.

My ticket for this was kindly provided by the NYT. I sat in J5, which would normally cost £18.
Posted by Billi at 08:00