The best Strictly routine ever

Yes alright I know. It's been a while. But I've been busy. Well, I say 'busy'. I mean 'on trains'. Lots of trains to lots of regional conferences on lots of Saturdays. The upshot of which is that I've not had a great deal of free time that I've not already allocated to sleeping. So apologies for that. I'll try harder. 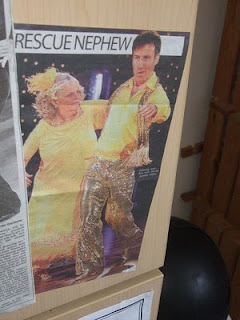 Anyway, I've been a bit out of the loop Strictly-wise. As I say I've been travelling a lot, usually on Saturday evenings so I've fallen out of step with the series overall. I have, of course, been keeping up to date with developments from Team Annton though. And my haven't there been developments.

Firstly, I'd like us all to spend a moment thinking about the majesty of the gold sequin trousers. I mean really. They were a thing, weren't they? Love or hate - and I don't feel I need to tell you which camp I'm in! - you can't deny that there are very very few men who would have the cajones to even try them on, let alone actually get away with them. The photo, by the way, is a newspaper clipping that's now gracing our fridge door.

Anyway, sartorial amazingness aside - and I can't help but feel that this series has been a cracker for La Du Beke in that regard both in terms of costumes and the lessons in how men should dress he's been giving on It Takes Two - I suppose I should mention dancing at some point. I'm glad to see Anton and Erin have returned to regular pro dance slots now. And they've been good ones, none of this dubious 'unleashed' nonsense.

But the main thing I wanted to draw your attention to is the brilliance of the Titanic themed rumba routine from last week. I'm not going to mince my words: it's my favourite Strictly routine ever. I may take some heat for this from the 'it's a dance contest' crowd but I believe my general disdain for that crowd is well known, so I don't care. In terms of pure entertainment value - which is what the show is about of course - you can't match it. From the manic shout of 'ICEBEEEEEEEEEEEEEEEEEEEEEEEEEEEEEERG' at the beginning, through the slightly perturbed look as the Widdy embrace is locked in, to the foghorn sound effect at the end the whole routine is just genius. Serious kudos to Anton for this. The man is proving to be a comedy genius, which isn't a surprise to anyone who's seen him on tour. Can you really imagine any of the other pros doing something that's so blatantly just a bit of fun? I could go on at length about this I love it so much. So here it is for your viewing pleasure, but mostly mine.