Theatre Review: Fiddler on the Roof

As a big and unashamed fan of a good old fashioned musical, when it was announced that then-Artistic Director of the Sheffield Crucible, Daniel Evans, was moving south to take up the same post at Chichester Festival Theatre I was incredibly excited.

Both are famous as home of excellent musicals: Sheffield gave us the sublime Show Boat and a My Fair Lady (starring Dominic West in a piece of inspired casting) so good that I still think about it today despite the fact it was about a billion years ago now; Chichester has recently produced such gems as Guys and Dolls, Gypsy and the glorious and unlikely Michael Ball starring Sweeney Todd.

My hopes for Evans’ first musical at Chichester were therefore sky high. When it was announced that that musical would be Fiddler on the Roof they got even higher. And, sitting down to finally watch the show, from the first bars of the first song I knew that they were going to be 100% fulfilled. At least. 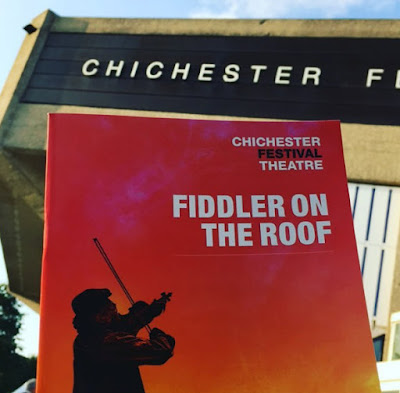 I’m not going to insult anyone’s intelligence by taking any time to explain the plot of Fiddler - if you don’t know it, then a) how? and b) Wikipedia. It is regarded as an absolute classic of the modern musical for a number of very good reasons: the music is incredible - the number of out and out classics in its tracklist is astonishing - and so evocative of a time, place and culture; the story it tells is by turns gripping, joyful and heartbreaking; the cast of characters is deeply drawn, fully rounded and utterly human. Chichester’s production plays up all of these strengths, particularly the music with an orchestration that is rich, lush and impeccably sung and played. By the first ‘-tion’ of opening number Tradition (and really how many better opening numbers are there?) I was completely sold.

This really is an example of Chichester’s main stage musical, indeed anyone’s any-stage musical, at its finest in all aspects. Alistair David’s choreography is just amazing, and danced perfectly, and the big group numbers in particular are a joy to watch. Daniel Evans takes the reins as director himself and completely delivers. Fiddler is a show with very wonky act lengths - the first is very long, the second very short - but in Evans’ hands the first act doesn’t drag for an instant and the second act never feels remotely hurried. Some of his artistic choices are really effective too, particularly the way that the music is foregrounded by bringing the titular fiddler onto the stage, and indeed the ‘roof’ of the stage, regularly. The production also looks great. Lex Brotherstone’s design is relatively simple to look at, but makes great use of Chichester’s thrust stage and revolve. When he does take the gloves off, in a knowingly OTT dream sequence which has the kitchen sink thrown at it in terms of staging and physical effects, it’s equally effective. Maybe don’t wear a jumper for this bit if you’re sitting in the front row is all I’ll say.

Productions of Fiddler, no matter how good elsewhere, are made or broken by their starring role, the iconic Tevye, though. Chichester’s is Iranian comic Omid Djalili which, on paper, is perhaps an odd choice. But - to borrow a phrase - musicals aren’t staged on paper and Djalili is absolutely brilliant, to the extent that I now can’t ever imagine anyone else playing the part. His Tevye is, naturally, very funny but also conveys huge gravitas and wisdom. When the show turns from a sort of comedy of manners in the first act into something much, much darker in the second he also delivers such heartbreaking pathos that you just can’t help but root for his little family even more. Tevye is a complicated character, much more than the If I Were a Rich Man cliches of pop culture will allow for, and I imagine quite a difficult one to play but Djalili gets it spot on. Hands down a performance of the year.

As is Tracy-Ann Oberman as his long suffering wife Golde. Golde really comes into her own in the second act of Fiddler, she doesn’t get to be a ‘comedy’ character in the first in quite the same way that Tevye does, and certainly for my money Oberman really steals the show after the interval. I know I use this word a lot in my reviews, but her performance is genuinely heartbreaking. I utterly melted for her and lost count of the number of times I ended up in tears - proper, ugly tears - because of her performance. It’s a beautiful thing to watch, just leave the mascara at home.

There is strong support for these two central performances across the board in a pleasingly huge and properly old school ensemble who are, bluntly, great. As I’ve already mentioned the big set piece numbers are a complete joy and that’s so much thanks to the work and the talent of every single member of the cast.

So, Chichester’s musical magic strikes again. I really can’t praise this show enough and it must, surely, be eyeing a West End transfer. It certainly deserves one, and more people deserve the chance to see this gem of a show. As it is it’s basically sold out for the last few shows of its Chichester run making this post largely pointless, soz. You need, yes need, to know how much I love this show though. Get praying for that transfer...

Fiddler on the Roof plays at the Chichester Festival Theatre until 2nd September.