Ding ding, round two! As awards season edges ever closer to the big one (the Oscars, duh) the runners and riders had another chance to show off their red carpet wares at the SAG awards this weekend.

So who came out on top? 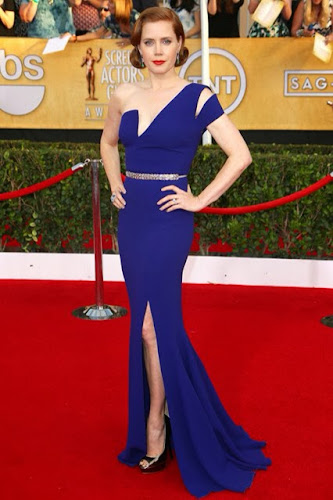 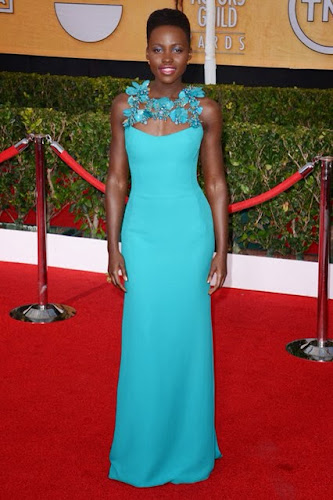 All hail Queen Lupita of Awardsseasonland. The colour is perfect, the fit is spot on, the embellished neckline is stunning and the styling is so cool. I can't even imagine how fabulous her Oscars gown is going to be! 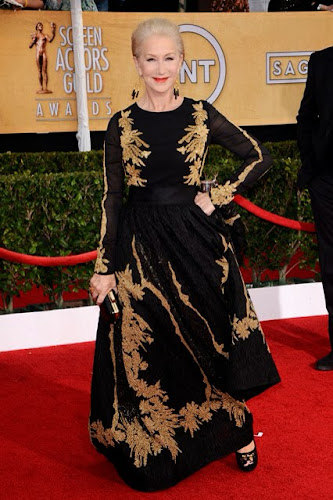 I mean, does Helen Mirren ever look bad? No, no she doesn't. This dress is her typical age appropriate and glamorous best. Love the fuss free styling too, something that a dress with this much embellishment always looks better with. 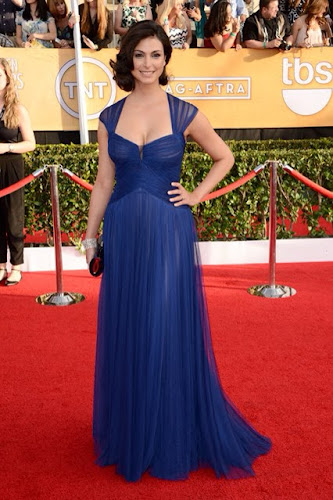 Again with the beautiful cobalt. I love this look for its old school simplicity. The colour, the fit and the beautiful draping - not too mention some incredible curves - are totally doing it for me.
Jennifer Lawrence in Christian Dior Couture 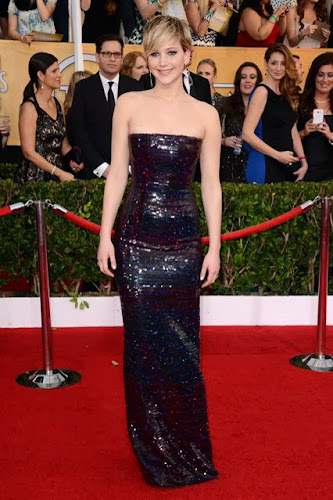 As previously stated, I'm not a huge fan of the J-Law/Dior collaboration. Most of the time this is because I find the Dior looks age the divine Miss Lawrence. This one I love though. It's simple, sexy, glamorous and modern. Plus the styling is fab.

Posted with Blogsy
Posted by Billi at 18:51 No comments:

You know who'd be perfect for the role of Vassily in Fortune's Fool? Iain Glen.

Vassily is a penniless gentleman of questionable provenance who's dependent on a young, pretty, blonde woman to whom he's deeply attached to the point of obsession for his home. Or, to put it another way, Vassily is Game for Thrones' Ser Jorah Mormont in a different costume. And who plays Jorah Mormont? Iain Glen!

Deeply annoying, then, that Iain Glen was forced to pull out of playing said role in The Old Vic's revival of Ivan Turgenev's Russian comedy by ill health (get well soon, awesome man).

Good god is it missing him.

Fortune's Fool focuses on Vassily's story. Who is this penniless man that's been living in his old master's house for thirty years? How did he get there? Why was he allowed to stay? Is he really an unjustly disinherited member of the local gentry? He is a complex, tragi-comic character; a figure of fun to be humiliated for some, a figure to be pitied and protected for others. A difficult part that requires an actor of serious class. Say, I don't know, Iain Glen?

Iain Glen's understudy, Patrick Cremin, is no Iain Glen. Obviously. Although he gave a competent run through of a complex script - some of the monologues he had to get his tongue around can perhaps be summed up as Sir Humphry on acid - for me he just didn't connect with the material in a meaningful way. I didn't laugh at the funny bits, I didn't feel any emotion in any of the tragic bits. It was all very one note and very bland.

On the plus side, the other lead actor, Richard McCabe, was excellent as the boorish, old money caricature Tropatchov. An unpleasant, but very very funny character, McCabe extracted every ounce of both humour and malice from him in a scene stealer of a performance. For me he saved the show and kept me interested, at least when he was on the stage. The production looked beautiful too and the staging really worked.

Overall though, an uneven and unexceptional watch. Frustrating really, as with Iain Glen in the central role I can see how it could've been excellent. Ah well. Game of Thrones is back in April...

Posted with Blogsy
Posted by Billi at 19:52 No comments:

Awards season 2014 is upon us and round one of the fash-off is over. So who were the winners? And does Jennifer Lawrence's loyalty to Dior continue to be the worst thing that's happened to red carpet dressing since forever? (Spoiler: yes it does.)

Here's my cream of the crop... 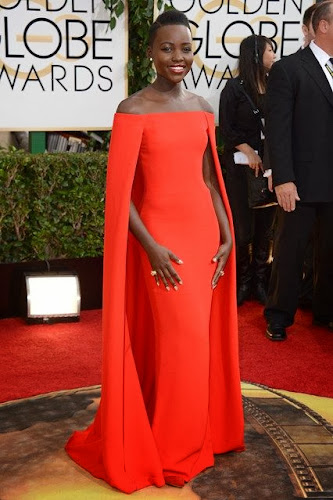 Stop fashion. Lupita Nyong'o just won it. Amazing colour, perfect cut, stunning styling, there's nothing about this look that I'm not obsessed with. I can't even begin to think how anyone will better this all season. 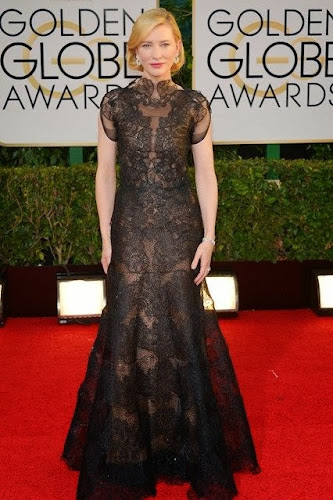 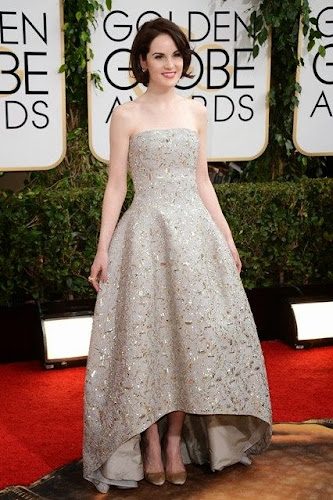 I can't say I'm usually a fan of the assymetrical hem, but lovely Michelle pulls it off with aplomb here. I love the simple styling of this - nude pumps, minimal jewels, natural make up, unfussy hair - and the embellishment on the dress is divine. 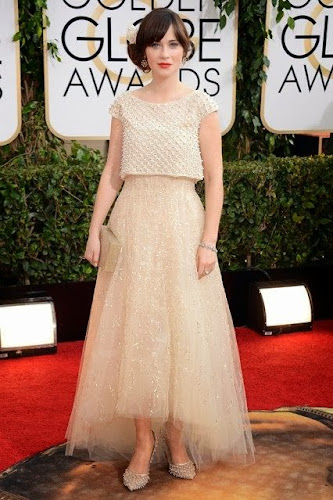 Just the right side of quirky, this look is super cute. I like the interplay of the different embellishment and the pearl studded shoes are to die for. I'm not usually a fan of Zooey's style, but this time she gets it so right. 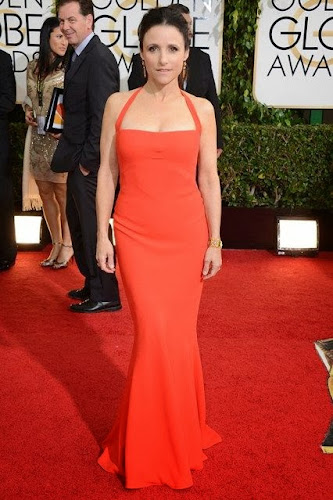 Julia Louis Dreyfus is 52 years old. Let's just look at that photo and think about that for a moment. Ok? This dress just looks good. Damn good. The cut is perfect - and that thin halter strap is doing magical things for her shoulders - the fit is perfect and her body is frankly frighteningly good. (And JLD won the ceremony.)

Next up? The Screen Actors' Guild awards on Sunday. Bring it.

Posted with Blogsy
Posted by Billi at 22:05 No comments: 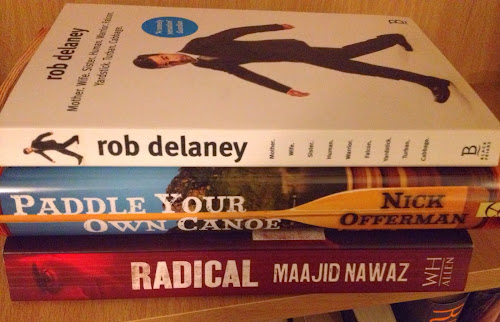 So Christmas TV was pretty shit this year, right? Elaine 'world's most annoying woman' Paige on Strictly, the terrible mess that was the Open All Hours new episode and a Doctor Who with a storyline so impenetrably dull and nonsensical it could've been a film on SyFy. And of course repeats. So many repeats.

On the plus side, more time for books. I read three cover to cover over the holiday (and started another, of which more at some point in the future) so here are some potted and uninsightful reviews for your convenience... (Spoiler: I like autobiographies.)

Maajid Nawaz is a very interesting character. Currently head of the counter-extremism group Quilliam (of getting Tommy Robinson to quit the EDL fame) and a Lib Dem Parliamentary Candidate, he spent much of his earlier life as a die hard believer in political Islamism. He was a prominent member of the Islamist group Hizb al Tahrir, something which landed him with a lengthy stay in Egypt's notorious prison system including one of its secret torture jails.

Radical is his autobiography. It deals with the entirety of his relationship with Islamism, including how he became involved, his experiences as an HT member and how and why he came to disown the ideology of extremism. It's undeniably an interesting and compelling story. It's a very vivid and well written illustration of the way Islamism works and how it can become so pervasive so quickly.

What it's not is anything new. If you're looking for new insights into how extremism works and what we can do to counter it - which I think it's reasonable to expect given the author - then you'll be disappointed. This is especially so if you've read Nawaz's friend and Quilliam cofounder Ed Husain's excellent The Islamist and we're expecting something similarly rigorous. I was and felt a bit short changed.

As a piece of autobiography it's worth a look though. Just make sure you pick up The Islamist at the same time.

Nick Offerman - Paddle Your Own Canoe

If Ron Swanson - Offerman's phenomenally awesome Parks and Rec character - had written an autobiography it would definitely not be this book.

Although there are plenty of woodworking tips (the book's title is both a literal and figurative instruction - he does describe how you would go about building your own canoe) and odes to red meat and facial hair, this book is not some kind of Swanson's guide to life. It's much more rounded, almost as if Nick Offerman and Ron Swanson are not in fact the same. Who knew?

Canoe is the very funny lifestory of an actor/carpenter combined with some very funny ranting on topics dear to the author's heart. The autobiographical part of the book (each chapter is split, part autobiography part rant) is genuinely interesting, genuinely funny and genuinely touching in parts. And Parks and Rec fans won't be disappointed by the on-set anecdotes about Chris Pratt and his ability to craft model vaginas from candy floss. The topic specific rants were my favourite part though and I agreed with almost every one, from the importance and pleasure to be gained from making things to this perfect summation of my views on organised religion: 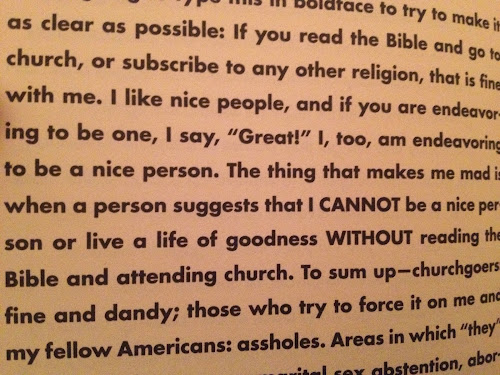 Yeah, the title of this book pretty much sums up its humour and why it's awesome.

Rob Delaney's ('the funniest man on twitter') excellent autobiography is the first book in a long time I've read in one sitting. And I can't emphasise the word 'excellent' there enough.

What I possibly didn't expect was how touching this book would be too. Delaney has struggled with alcoholism and depression and offers a very honest portrayal of both. His take on depression and the way it effects people physically and emotionally will ring very true for anyone who's either experienced this awful illness themselves or watched a friend or family member suffer with it.

A great read from cover to cover. Buy it now.

Posted with Blogsy
Posted by Billi at 22:04 No comments: