I'll confess I don't really know much about latest It film The Hunger Games. I know it's based on a book. I know male lead Liam Hemsworth is hot (not as hot as his brother Chris, of Thor fame, though). And, I know female lead Jennifer Lawrence is a) a great actress, b) gorgeous and c) one of the best dressed people around at the moment.

That last point is the one that's impressed itself on my mind the strongest. Her wardrobe for the promotional tour has been jaw droppingly good. Let's take a walk through some of the best bits (to date). 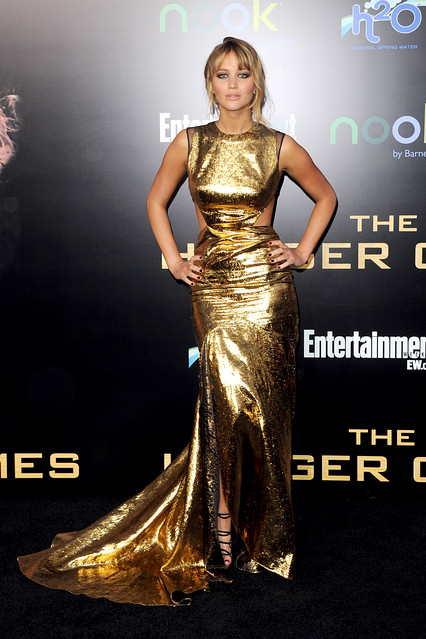 At the world premiere of the film in Prabal Gurung. I think the word I'm looking for is fierce.

And now for something completely different...

Looking completely sultry in Tom Ford at the Paris premiere. Proof that the right LBD is just as effective as the most extravagant evening gown. Love the poker straight hair and crimson lips too. Smoking hot!

But, y'know, sometimes you do just want to wear an extravagant gown. Enter Marchesa.

If you're going to go for extravagant then who better than Marchesa to provide it? Love the matchy matchy red shoes too.

Time for my personal highlight. The next three beauties were worn on the same day. (I want her life.)

1) Keeping it simple in Raoul for an appearance on Letterman. The perfect LBD strikes again.

2) Back in Prabal Gurung to leave Letterman. The gold lace on this is lush.

3) Flashing a bit of flesh but keeping it classy in gorgeous green Calvin Klein. The cut and colour of this dress are so perfect for her shape and colouring. Also? Boob envy. Just saying.

And I'm sure there are more to come, but that's for another blog post. Let's just hope the film is as good as her wardrobe!
Posted by Billi at 18:27 No comments:

Disney, I'm annoyed with you

(And now I'm also annoyed with Blogger/myself for deleting the original version of this post when I tried to correct a typo in it. This version is better though, promise.)

So John Carter is going to go down as one of the biggest movie flops in history. As HuffPo reports, it's set to lose parent company Disney around $200million. That's a big number. Mickey Mouse is going to have to shift a lot of Dole Whip* to make that up!

Now I saw JC over the weekend. It was a good film; not great but not awful and certainly not the turkey these numbers make it out to be. Visually, it was stunning - the landscapes, the effects, the CGI creatures were all brilliant and that's before I even get to the aesthetic appeal of the largely topless/otherwise half naked cast! (In my chart of hot villains, Dominic West's Sab Than is somewhere near the top. Mmmmm... I digress.) Although leading man Taylor Kitsch left me cold - and I hope he only got the part after Zac Efron turned it down, he would've been much better - the supporting cast was fab. All in all it was exactly what that sort of sci-fi-come-action film should be: an entertaining couple of hours.

I'm a geek. I'm a Disney loving geek. I'm a Disney loving, sci-fi-come-action film loving geek. I should've been the target of this alleged marketing campaign. So how did I find out about JC? Trailer in the cinema? TV spot? Print advert? Viral campaign online? No. I find out about it whilst stalking casually browsing Dominic West's IMDB page. Even the last minute, panicky push out of clips, trailers and interviews didn't appear on my radar until sites like Den of Geek wrote about them in the context of the general mess that the JC marketing became. If I wasn't noticing this stuff then who the hell else would be?

Compare and contrast with other recent, and less good (for my money), Disney offerings like Pirates of the Caribbean 2-4. I literally lost count of the number of adverts of various types I saw for POTC4. And that was a well established franchise with a well established fan base that, frankly, would probably have done fine without any advertising at all.

Part of me wonders whether Disney is prepared to take the hit on John Carter because it knows it will surely make the loss back with its share of mega franchise The Avengers which is out later this spring (and which I know all about thanks to some decent marketing). If that's true I'm even more annoyed.

Anyway, if you get the chance do go and see John Carter. As I said it's a good film that deserves to find an audience - and really is worth seeing on the big screen. I especially recommend it if you're a fan(girl) of Dominic West and/or James Purefoy both of whom are scene stealingly excellent in it. And half naked. I may have mentioned that already.

*This is an in joke for Disney World fans. If you don't get it then you clearly need to visit WDW, stat.

There's no point lying about this: I fangirl over Michelle Obama as much as I do her husband. Often more so.

I do not fangirl over David Cameron. This is just not a thing that happens in my life for a number of reasons. I have a lot more time for his wife, though. Anyone who's had a successful career in fashion (especially as an accessories designer) is something of a girl after my own heart.

One of the things I like about both Sam Cam and Mrs O is the way they use their wardrobes to promote the fashion industries of their respective countries. And let's face it, they both look damn good doing it. Both of them have long being style crushes of mine.

With the Camerons currently on a state visit to the USA all eyes - including mine - have been on the two First Ladies fashion choices. Both have stuck to their signature styles and local designers, and both have looked consistently brilliant for doing so. They've provided a case study in how to combine high fashion and high politics which, as a fashion obsessed politico, has made me very excited indeed. At the state dinner last night, Sam Cam went for a slightly quirky high neck Alessandra Rich gown with Mrs O in teal Marchesa with a statement necklace from Tom Binns. A lesson in grown up glamour from both.

Earlier in the day, Sam Cam is in plum Victoria Beckham. In my fantasy world, this dress is the cornerstone of my work wardrobe. Well jel. At the official welcome at the White House, Mrs O chose a gorgeous Zac Posen dress and jacket (love the detailing on the jacket) and Sam Cam a Roksanda Ilinic dress accessorised with an Emilia Wickstead belt and LK Bennett shoes. But the gorge colour block dress wasn't Sam Cam's first Ilinic look of the trip. The day before she stepped out in this fab combo: an Ilinic top (cinched in with the same Emilia Wickstead belt) teamed with Jospeh cigarette pants and her trusty LK Bennett heels. Mrs O went for chartreuse L'Wren Scott on top teamed with cream wide leg trousers. And they both look way to good to be in a sports hall.

Whoever said politics and fashion don't mix? They were clearly an idiot.
Posted by Billi at 13:30 No comments: