Theatre Review: Guards at the Taj

I like going to theatres I’ve not been to before. It always feels like a small adventure. And given this particular theatre, the Bush, is in Shepherd’s Bush and thus somewhat out of the way for this West Sussex-ite, in this case it felt like a very literal adventure too. (I got to go on the Overground, for me this is very exciting.)

The Bush has just undergone a multi-million pound redevelopment which they were kind enough to invite me to have a nose around before watching their season opener, Guards at the Taj by Rajiv Joseph.

The new building is, in short, is a fantastic space. The front of house and bar/cafe area is great - airy, welcoming and with a really nice, relaxed vibe that is quite rare for a theatre. It’s also added a 60-seat studio to its 200-seat main house which is a space I’m definitely keen to check out.


Guards at the Taj is mostly a play about beauty: what it is, where it comes from, who should own it and how we judge it. It tells the story of two men, Humayun and Babur, guarding the Taj Mahal on the morning that it is unveiled for the first time. The emperor has decreed that noone can look at it as the dawn light hits it for the first time, but Babbur and Humayan do and are cosmically rewarded with the gruesome task of fulfilling the Emperor's demands that nothing so beautiful should ever be built again - by cutting off the hands of all 20,000 men who have worked on it. Karma’s a real bitch. 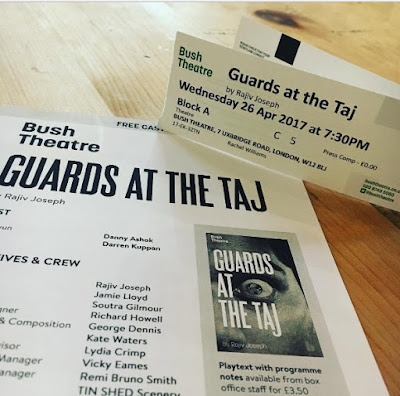 Beauty appears in several forms here, notably the Taj itself and in nature. The Taj’s beauty, Joseph seems to suggest, is destructive, not only practically for the 20,000 handless men but also to the happiness of Babur and Humayun and their friendship (another sort of beauty in itself). Nature’s beauty, symbolised here by flocks of birds, is redemptive and comes to represent a happy, peaceful time in the character’s lives. The Taj, manmade beauty, can only be seen by the privileged; the birds, natural beauty, can be seen by everyone.

For all that though, this production isn’t overtly aesthetic. Soutra Gilmour’s design is incredibly effective and incredibly simple; a rusty looking elevated platform set diagonally across the back of the equally rusty looking performance space (it’s not a stage in this production, though it may be in future - the new main house is completely adaptive), whilst ominous trenches run out towards the audience, again diagonally. It’s angular, stark and more than a little grim. An inauspicious setting for a play that’s all about beauty.

Beauty is evoked though. A really clever use of sound and lighting, courtesy of George Dennis and Richard Howell respectively, does it on one level. Fantastical bird song and a warm peachy light stand in for nature’s, and memory’s, beauty whilst unforgiving bright white lighting stands in for the Taj Mahal itself - use your imagination, it totally works. But the grimness of the story is also evoked too, notably through an ominous and judicious use of music, clever variation of the volume of sound to the point it occasionally makes the seating in the tiny theatre shake and an interesting use of backlighting to project weird shadows against the bare walls, usually of the two actors themselves.

And then of course there’s all the blood. Honestly, a lot more blood than I was expecting - and clearly more so than some of the audience members sitting in the front row nervously watching it approach their shoes were expecting too! That said, there is much less gore than director Jamie Lloyd (yes, that Jamie Lloyd) could have chosen to have included. For example, and spoiler alert, the moment where Humayun cuts off Babur’s hands is portrayed in this production via blinding white light and a piercing alarm tone. Reading Rajiv Joseph’s original play text, however, the scene is much, much more explicit and icky. It’s an interesting decision, perhaps dictated by the limitations of a small theatre, but I’m not sure it’s the one I would have made. As gross as the scene would be to watch, a play that is so concerned with beauty would only be strengthened, in my view, by showing us a bit more anti-beauty as well.

Beauty is also passionately evoked in Joseph’s text - modern, simple, surprisingly funny, humane and presented without dialect as per the stage directions - which is handled really well by the two young actors, Danny Ashok and Darren Kuppan, who comprise 100% of the cast. Ashok’s Humayun is the stronger performance for my money, though to be fair he is also the stronger character for my money, and is a study in stoic devotion to duty that crumbles and expands beautifully towards the end of the piece. Kuppan’s Babur isn’t weak by any means though, and he handles the emotional meat in the middle of the play, the horror at having cut off 40,000 hands and “killed beauty”, fantastically.

For a play that, plotwise, ends with someone lopping off their best friend’s hands Guards at the Taj ultimately left a very optimistic taste in my mouth. The final scene, a flashback of Humayun’s to the time he and Babur watched the flight of a million brightly coloured birds, drives home the ultimate triumph of natural over manmade beauty; nothing will ever be as beautiful to Humayun as those birds were. Possibly it’s because manmade everything is such a fucking disaster at the moment, or possibly it’s just that I really like birds (I do), but I found that a comforting thought.

Guards at the Taj plays in the main house at the Bush theatre until 20th May.