In most plays there is a single moment that manages to somehow capture and summarise the whole show. Whether it’s a line, a visual or a special moment in a performance, it’s the one thing that always resolutely sticks in my memory.

In the Kenneth Branagh Theatre Company’s production of The Entertainer, which I’ve been looking forward to for about eighteen months, it’s a song. Unfortunately, that song is called ‘Why Should I Care?’ and sums up in four words pretty much every feeling I had about this crushing disappointment of a show. 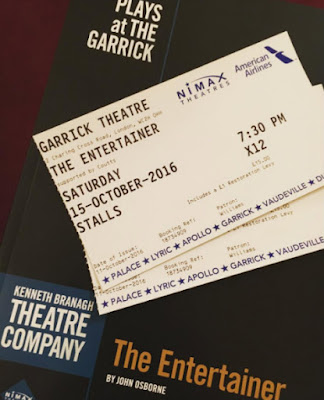 This production does a reasonable job of tying up all three parts, mostly through Christopher Oram’s suitably bleak-but-beautiful design that places a proscenium arch as the backdrop to all of the scenes, including those in the Rice family home. Any attempts to milk the contemporary parallels with Brexit are also mercifully side stepped, with the production content to let its audience make the connection for themselves. And the music hall scenes, complete with dancing girls and live band, are impressively done in an Ed-Balls-on-Strictly-but-with-a-knowing-wink sort of way. I enjoyed the Branagh take on Frankie Howard and would gladly see him do some kind of ironic stand up tour with it.

The family scenes, though, are close to the definition of tedious. Where in this family of terrible, boring people is the blistering anti-hero to root for that playwright John Osborne is supposed to be the master of? Is it supposed to be Archie? His daughter? This production left me with no idea and frankly little motivation to try and work it out. The fact that the entire family is some degree of drunk for most, or in some cases all, of the show also didn’t help for me. Drunk people are boring unless you’re one of them. (I had a glass of wine at the interval and enjoyed the second act more - coincidence?)

In the main, the acting is really nothing to write home about but thankfully there is a strong central performance from KenBran to anchor it. He delivers the only real emotional depth in the show, including the sole genuinely poignant moment as Archie disappears into the quiet darkness at the end of the show. His tap dancing is also impressive, as an aside. Even he has been better elsewhere this season though.

It’s really sad to see the Plays at the Garrick season go out with such a whimper rather than the bang it otherwise deserves. Because I’ve really enjoyed the rest of it. Some of it - The Painkiller, The Winter’s Tale, Harlequinade - has been amongst my favourite theatre of the past couple of years and even those that haven’t quite made that list - Red Velvet, Romeo and Juliet - have been eminently enjoyable and great productions.

It’s also been a real thrill to see Kenneth Branagh back on the stage, or at least immediately behind it, and cracking open his address book to deliver some genuinely top drawer casts. And his commitment to keeping ticket prices low - I paid £90 for the entire season, which is just astonishing when you stop and think about it - and capping the fees that agents could charge on them is incredibly admirable. I hope the rest of the West End takes note but suspect that it will not.

But more than anything I hope that the Kenneth Branagh Theatre Company season two is announced very soon. Like, yesterday preferably.

The Entertainer is part of the Kenneth Branagh Theatre Company’s Plays at the Garrick season and plays until 12th November.