I’ve learned quite a lot about Ancient Rome this year. Most importantly, there are a lot more goats on the Via Appia than BBC history documentaries would have you believe. But also Roman politics makes for some fucking great, and depressingly relevant, theatre. 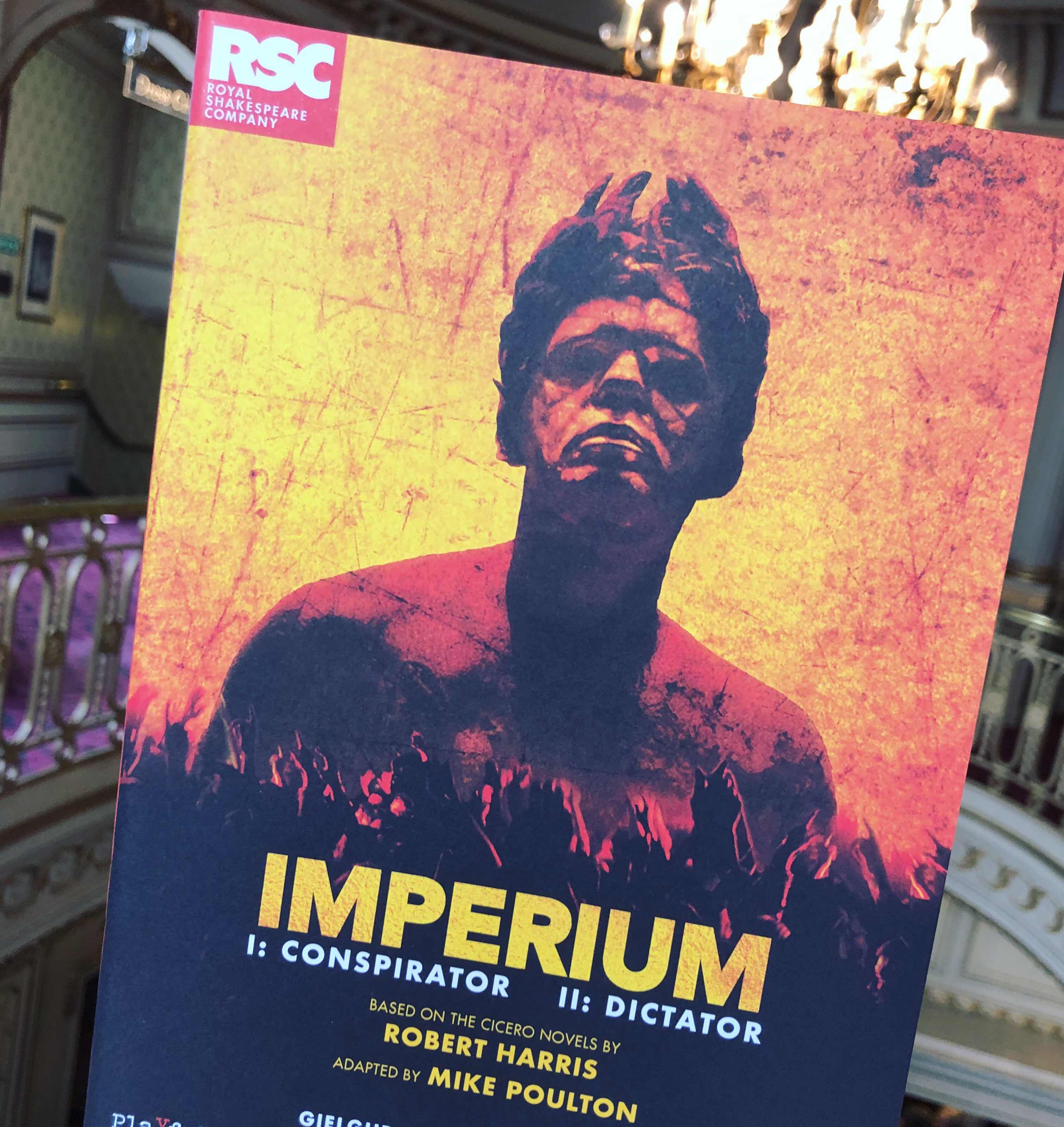 After the stonking success of Nicholas Hytner’s superlative defying Julius Ceasar at The Bridge at the top of the year (still the best theatre of 2018 for my money) comes the RSC’s Imperium two parter: Conspirator and Dictator (I’m going to refer to them as one play throughout, because laziness). Adapted by Mike Poulton from Robert Harris’ trilogy of books, which have just rocketed up my To Read List, Imperium tells the story of Cicero - Rome’s greatest orator - as he lives through the rise and fall of the Roman Empire and the slide into dictatorship. As such all of the events of Julius Caesar are retold here, covered in Dictator, but they’re not the sole focus of the play. Crucially, Imperium tells the Caesar story from the point of view of someone who was allied with neither Caesar nor any of the conspirators. In other words, it takes a story we all know, sets it in considerable political and historical context, explaining where Caesar came from and what happened after the Ides of March, and tells it in a completely different way.

And I loved the completely different way Poulton’s chosen to tell it. Structurally, first of all, it’s super clever - helpful given the total run time of the play is just shy of six hours. First of all, we’re given a narrator to help us navigate the epic sweep of the play in the form of Tiro, Cicero’s slave/biographer. In a play of this length and of this level of complexity (and with so many characters with very similar names) this really helps. It helps doubly that Tiro is also a character in the action. He’s not a Chorus in the Greek tradition, which are inevitably quite tedious, he gets stuck in too. A lovely, fun upshot of this is that his narration regularly gets interrupted by Cicero critiquing him - an early ‘this is a getting a bit expositionary, Tiro’ put me in mind of the great Basil Exposition running joke in Austin Powers and so made me giggle like an idiot. It helps the play flow that Tiro can switch seamlessly between reminding us who the character who’s just walked on is and responding to them. The second great structural idea is the fact that each play is explicitly broken into three hour long episodes, named in the programme based on who the main antagonist is. This is unashamed box set theatre and it totally works, both in making it manageable (and comfortable) for the audience but also in making sure that the action never slows.

Poulton’s script is also great: quick, funny and rich. Another result, I think, of the box set structure is that it gives him more scope to make the script quite demanding for an audience to follow: he can pack in loads because we all know we’re getting a break to process it soon. As the man behind the RSC’s mighty Wolf Hall and Bring Up The Bodies adaptations, I already considered Poulton the King of Literary and this very much comets him there. His/Robert Harris’ characterisation is fantastic too. Everyone is vividly drawn and distinct and credible. The main characters, Cicero in particular, are joyfully rich. And I just adored seeing a new spin on the famous Julius Caesar cast which fully backs up my theory that Brutus is a fucking idiot and Cassius deserved better. It also makes Caesar a seriously nasty character in a way that he never gets to be in Shakespeare’s telling and brings some women into the narrative (hurrah!) It is, in short, a great piece of writing. That there is six hours of it is a gift.

Directed by the RSC’s Artistic Director, Gregory Doran, this is also a great production. His direction is blistering, with a constantly shifting yet clear eyed focus delivered with a conspiratorial wink. The use of significant direct address to the audience - forming the additional character of ‘the rest of the Roman Senate’ - is really well done (even if it rather pales in comparison with the equivalent in The Bridge’s promenade Caesar, a comparison I’m trying hard not to make but in this aspect it’s almost impossible not to). Though it definitely overplays its hand in terms of contemporary relevance, I could 100% have done without a character in a Donald Trump wig, Doran is crystal clear about what this production wants to say. Anthony Ward’s design is, with one notable exception which I’ll come to, so atmospheric and so effective. Mark Henderson’s lighting is superb, and knocking on for a week later I’m still thinking of the final image of Conspirator where a bright white square of light picks out youthful antagonist Clodius - it’s so joyfully playful! Paul Englishby’s regal music and Anna Morrissey’s sprightly choreography keep this huge production on its toes. Everything feels as epic as the play is long. My one criticism is of the globe which hangs over the stage the whole time. I’m not sure what it’s supposed to do but what it actually does is restrict the view of the top of the stepped stage for quite a lot of the auditorium. It’s an irritant and adds nothing. It doesn’t actually look that nice either. Sight lines are also a slight issue when characters walk right to the front of the stage, which is also stepped down into the auditorium, and though I understand the purpose of this bit I’m not sure the same effect isn’t achieved when characters just stand on the actual stage where everyone can see them.

An epic production of an epic play requires an epic, and massive, cast, many of whom do double duty with a different character in each play. Richard McCabe has surely the best gig in the West End at the moment as Cicero. It’s a huge part and he is superb in it. Cicero is not always a likeable character, but in McCabe’s hands he is always sympathetic, credible and enormous fun. There’s such energy in his work and such detail too. The way he ages himself (makeup etc aside) is barely perceptible until it resolutely isn’t and you’re left wondering when it happened. Top, top stuff. As our lovable guide Tiro, Joseph Kloska, has as much work to do and does it with the same amount of energy and fun. There is a risk, I think, that Tiro could become purely a plot device who occasionally tells a joke in the wrong hands but there’s no risk of that with Kloska. Our erstwhile heroes are ranged against some cracking antagonists: Joe Dixon’s Catiline and Mark Antony are tremendous fun and dripping with malice, Peter de Jersey’s Caesar is a properly dangerous end of level baddie, Nicholas Armfield’s Clodius and Oliver Johnstone’s Octavian add some youthful opposition, villainy and hijinx to Conspirator and Dictator respectively. Nicholas Boulton’s Celer/Cassius also deserves a mention, especially his powerful Cassius who is exactly as exasperated with Brutus as I always am.

Imperium is at the Gielgud until September 8th.

Oh, and in case you were wondering about the goats... 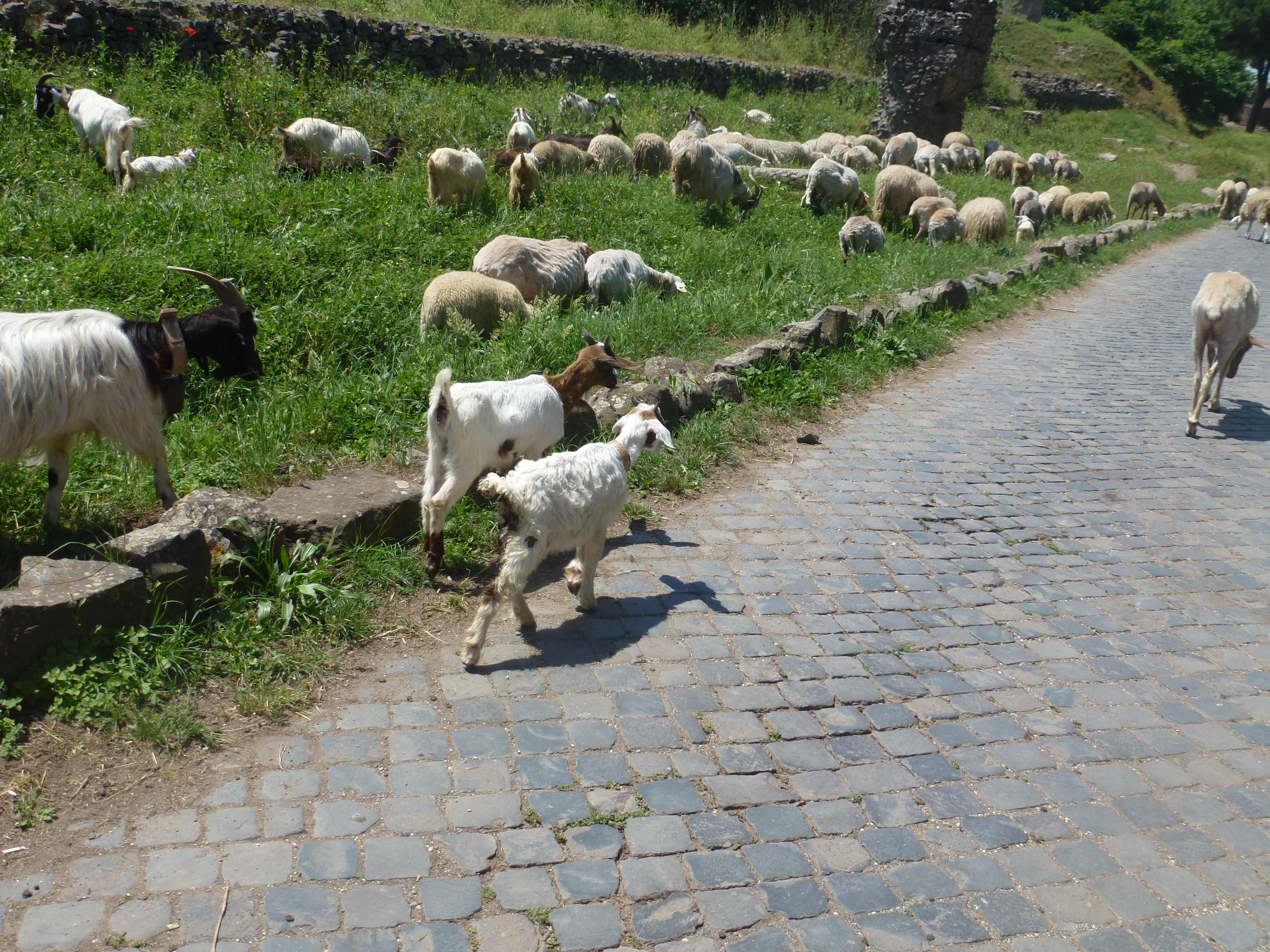