Is there a sweeter phrase in the specifically British iteration of the English language at the moment than 'I can't remember the last time I thought about Brexit'? Probably true for every other European language for that matter. Honestly, I'm not sure how I'd be surviving this omnishambles of a clusterfuck were it not for copious distractions. The problem is, so few things are sufficiently absorbing and, well, anti-everything that Brexit is that they can manage to distract me anymore. 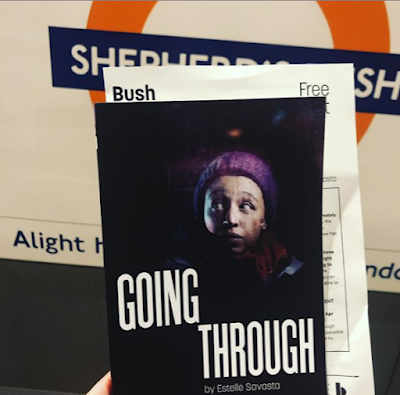 Told in both English and sign language (a first for this theatregoer) Going Through, originally Traversee, by Estelle Savasta (translated by Kirsten Hazel Smith) tells the story of child migrant Nour's journey as she leaves behind Youmna, the woman that raised her, and girlhood and heads to Britain (in this production, the precise geography of her journey isn't specified in the text - pleasingly so as it sort of doesn't matter) and womanhood. I hate this word but I can't think of a better one: it's a lovely piece of writing. It's uplifting. It's humane. It's a play that in no way sugar coats Nour's story but equally makes it ultimately full of hope. There is a lingering positivity in every line of the text that is just life affirming. It's a powerful corrective to, well, this *gestures wildly at essentially everything else in the world at the moment*.

More than that, there's a rhythm and a cadence to the writing that makes it feel like a poem; a poem dedicated to the fact that life can be ok, growing up can be ok, people can be ok. Some of the individual lines are absolutely beautiful: "It's not always children's stories that happen to children", "I don't see whose enemy I could be, on the border of two countries I don't know", "I love you like it's not possible". If you fail to get swept up in this writing then I suspect you may be dead inside, frankly. The integration of the sign language fits so beautifully and expressively too. Even for those in the audience (me) who don't know what the signing literally means - and it's not always translated - you will understand what it means because it fits so neatly into the script as a whole (and because the actresses signing are so bloody good, more of which presently).

Director Omar Elerian is a perfect captain for this particularly gorgeous ship (other work at The Bush includes Misty and Nassim so, y'know, he's a goodun and a brave-un). His 75 minute production - a strong contender for the second best phrase in the English language right there - is technically some of the best theatre I've seen in bloody ages. Visually, it's absolutely stunning. To say Rajha Shakiry's design is striking is a level of undersell Theresa May would be proud of. Her set of moving blocks and rolling hills (the latter particularly beautifully constructed and evocative of all kinds of ideas of place and of home) is so clever. Combined with Nina Dunn's superbly effective video design, serving as caption screen, scenery and occasionally even a character in its own right, and Josh Pharo's lighting with its incredible, bold use of shadow, it almost steals the whole show.

The two person cast is equally fantastic (there's no casting director credited as far as I can see but whoever it is has done a cracking job). As Nour, Charmaine Wombwell (who signs and speaks) is heartbreakingly, soul cheeringly compelling with the poise of an absolute boss and a physical expressiveness that I'm sure many actors would kill for. She's exceptional in a piece which the script says can be, and often is, played as a monologue for her. Nadia Nadarajah as Youmna (who signs) also does some really beautiful work too, with her emotive signing and eyes that encompass every human emotion the play demands doing more work than others could do with reams of text.

Overall Going Through is just a beautiful thing. Gorgeous writing, a stonkingly good production and a brilliant cast. 75 minutes of humanity and joy. Highly recommended.

Going Through is at The Bush until 27th April.

My ticket for this one was kindly provided by the theatre. I sat in C11 which would normally cost £20.