Theatre Review: The Boys in the Band

The timeliness of my blogging is improving guys: today I’m reviewing a play which closes tomorrow rather than one that’s already closed!

Written in the late 1960s by Mart Crowley, The Boys in the Band tells the story of a group of gay New Yorkers, and a single straight(?) old school friend, meeting up for a birthday party. Drink flows, and amusing banter gets very nasty very quickly. It all ends in tears. 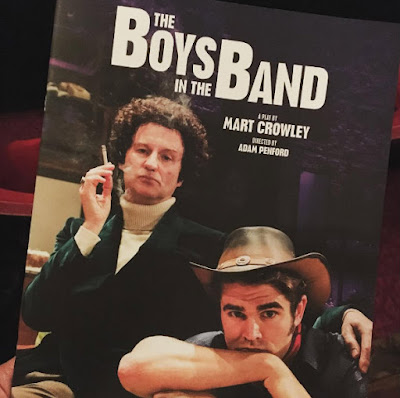 For a play that’s almost 50 years old, The Boys in the Band has aged pretty well. It’s still smart, sharp and vicious(ly funny) enough to be a very entertaining and affecting piece. But it is dated too, notably in the case of some of the comedy. I’m particularly thinking of the character of Emory, a Mr Humphries-esque stereotype of a mincing, sibilant gay man that, as the Are You Being Served? reboot so conclusively proved, doesn’t really cut it as a plausible character anymore. Or a particularly funny character either. I found him exceptionally irritating (though judging by the audience on the night I went I am perhaps in the minority on this). The ‘serious’ bits have aged much better and I found the emotionally brutal second act to be much more effective than the more comedic first.

The fact that this play has two acts though is baffling. With a run time of less than two hours there’s no natural place for an interval to sit and the cramming of one into the middle of an otherwise rather dramatic and punchy (literally and figuratively) scene, robbing it of any momentum, feels rather more like a way of pushing up bar income than anything justified by the action on stage. Were it not for the fact that this production has the best pre-show and interval play list I’ve ever heard it would have been doubly irritating.

Gristling aside, this production is great fun and the fact that it’s as successful as it is can be placed firmly at the feet of its excellent cast. Ian Hallard in particular is sensational as Michael, the party host and lead character in terms of stage time by a mile. The range he displays in this part is extraordinary, from broad comedy to awful cruelty via powerful self loathing. It’s a faultless performance, by far the best I’ve seen this year and likely one of the best I will see for the rest of it too. A few other performances are worthy of mention too: Daniel Boys is something of a ‘straight acting’ revelation, to me at least, as the neurotic Donald, Greg Locket is a welcome injection of humanity as the (relatively) gentle Bernard and John Hopkins, aka my second favourite John-Nettles-era-Midsomer-Murders sidekick, is unrecognisably brilliant as the exceptionally unsympathetic Alan, the token straight(?) - probably the most interesting and complex character of the lot.

You’ll notice that Mark Gatiss doesn’t feature on the above list and someone else is described as the play’s lead which, if you’ve seen any of the marketing for this production, may surprise you. It certainly surprised me. Although his part, Harold, is the catalyst for the action he’s actually not on stage for that long and, frankly, plays a pretty one note (if very funny) character. Gatiss’ performance is very good but he’s not the star here. It irritates me a lot that the marketing suggests he is and, whilst of course I understand why that decision has been taken, in my view it does a pretty egregious disservice to Ian Hallard. It irritates me to the extent that it actually detracted from my enjoyment of the production slightly, which is very rare for a marketing gimmick.

However, The Boys in the Band is still a fun night out. Not perfect, but worth your time nonetheless. As a very early entry in the ‘gay cannon’ (doesn’t that sound fabulous?) it’s a super interesting piece of social history and, if that’s not your bag, Ian Hallard’s performance alone is worth the price of a ticket. Just make sure you arrive early enough to enjoy the epic pre-show music and have a sitting down dance along. Be quick though, the end of the run is as nigh as nigh can be.

The Boys in the Band plays at the Vaudeville Theatre until 18th February.