I’ve often been underwhelmed by the big, high profile exhibitions at the V&A.

They’re often way too crowded, use the space poorly, are boringly presented (thick glass cases, no photos, officious staff) and are just not great value for money - especially when compared with the offerings at other museums of a similar profile and size and especially especially the vast, spectacular, innovative Met in New York where Savage Beauty was originally shown.

Honestly? I wish I’d seen Savage Beauty at the Met because as much as I enjoyed the exhibition - and I did, don’t get me wrong, I really did - my normal issues with the V&A did detract from it. 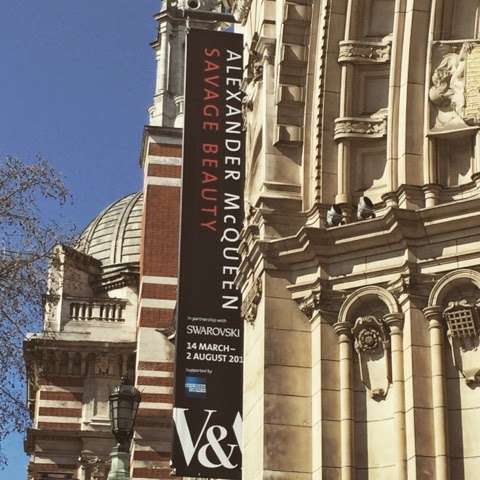 Let’s start with the positives though. This exhibition is a McQueen lovers’ dream. Covering everything from his 1992 MA show and early career as a Savile Row tailor right up until his breathtaking unfinished final 2010 collection, the pieces in this exhibition are an expertly curated greatest hits - and then some.

For me, the highlights were the Romantic Nationalism room, showcasing McQueen’s Scottish influence perfectly and including pieces from his Highland Rape and Widows of Culloden collections, and the Romantic Exoticism room, which showcased the designer’s foreign influences and included a stunning recreation of the ‘models in a box’ catwalk show. The room showcasing his final collection, Plato’s Atlantis, was also really cleverly laid out - though beware the video if you’re as snake-phobic as I am - and I adored the hauntingly beautiful hologram video of Kate Moss (and the tiny dark room it’s played in) that featured in the Widows of Culloden show.

All of my favourite rooms - and indeed most of the exhibition to be fair - were shown without glass cases (hurrah!) and you were allowed to get up close and personal with the details on these incredible creations. The exhibition space is used really well too with each of the rooms, arranged in roughly chronological and tightly thematic order, themed to match the broad topic of the collections they’re showcasing. This makes for some great, unexpected, spaces and juxtapositions (at one point you go from a dark and naturalistic cave to a traditional Scottish country club) which really emphasises the breadth as well as the depth of McQueen’s talent.

And that, ultimately, is what makes this exhibition great. Frankly, you could show Alexander McQueen’s work, especially the edit on display here, in a heap in a car park and it would still be worth paying to see. The man was a genius, and this exhibition is a fantastic advert for that fact and the idea that fashion absolutely can be art.

My issues with the exhibition, then, are almost exclusively actually issues with the V&A. Even though I had a ticket for the first slot of the day, the room was already crowded when I got in. I wish the V&A would just sell fewer tickets for these major exhibitions - I’d happily pay more if it meant I got a better view of everything. There was some dodgy curation too, especially the Cabinet of Curiosity room which had items displayed from warehouse level ceiling to floor which was spectacular but meant that there was a lot of stuff that I physically couldn’t see. And my biggest moan was that there was so little information about the exhibitions and what there was was in a tiny font scattered around the exhibits. I could barely read much of it and I have insanely good eyesight (humblebrag). Some more context would’ve been nice too. Much of this is filled in if you buy the catalogue - which is great, as is much of the merchandise (I love my tote bag and am already using it to death) - but that’s not really the point.

Overall, Savage Beauty is my third favourite fashion exhibition ever (Jean Paul Gaultier at The Barbican and Charles James at the Met, thanks for asking) and is 100% worth your time is you love fashion or even just beautiful, occasionally slightly crazy, creative objects in general.

Savage Beauty is on at the V&A until August 2nd and there are still plenty of tickets available. My advice? Go, go early and go on a weekday.
Posted by Billi at 21:11 No comments: