Occasionally, a show comes along that is so brilliantly mad and/or unclassifiable that you know that the resulting blogpost is going to be something of an ordeal, in the nicest possible way, to write.

Like, how do you communicate that you love a show - and crucially why you love it - when you struggle to explain it even in your head? If long form blogging is supposed to be, and I believe it is, the way you would describe a show if you were talking about it down the pub then how do you write the equivalent of tipsily shouting at your friends ‘I love it and I will fight you if you disagree’? Let’s find out together shall we...

An Octoroon, recently produced by Richmond’s lovely Orange Tree Theatre and now thankfully brought into town for a run in the NT’s Dorfman, is a big, brave, boisterous piece by American playwright Brandon Jacobs-Jenkins that explores issues around race and drama. It’s also a weird, occasionally (intentionally?) baffling, never-seen-anything-like-this-before thing that I’m still processing days later. It’s achingly clever, and fabulously bizarre. I loved it, even the bits I don’t really know that I understood. 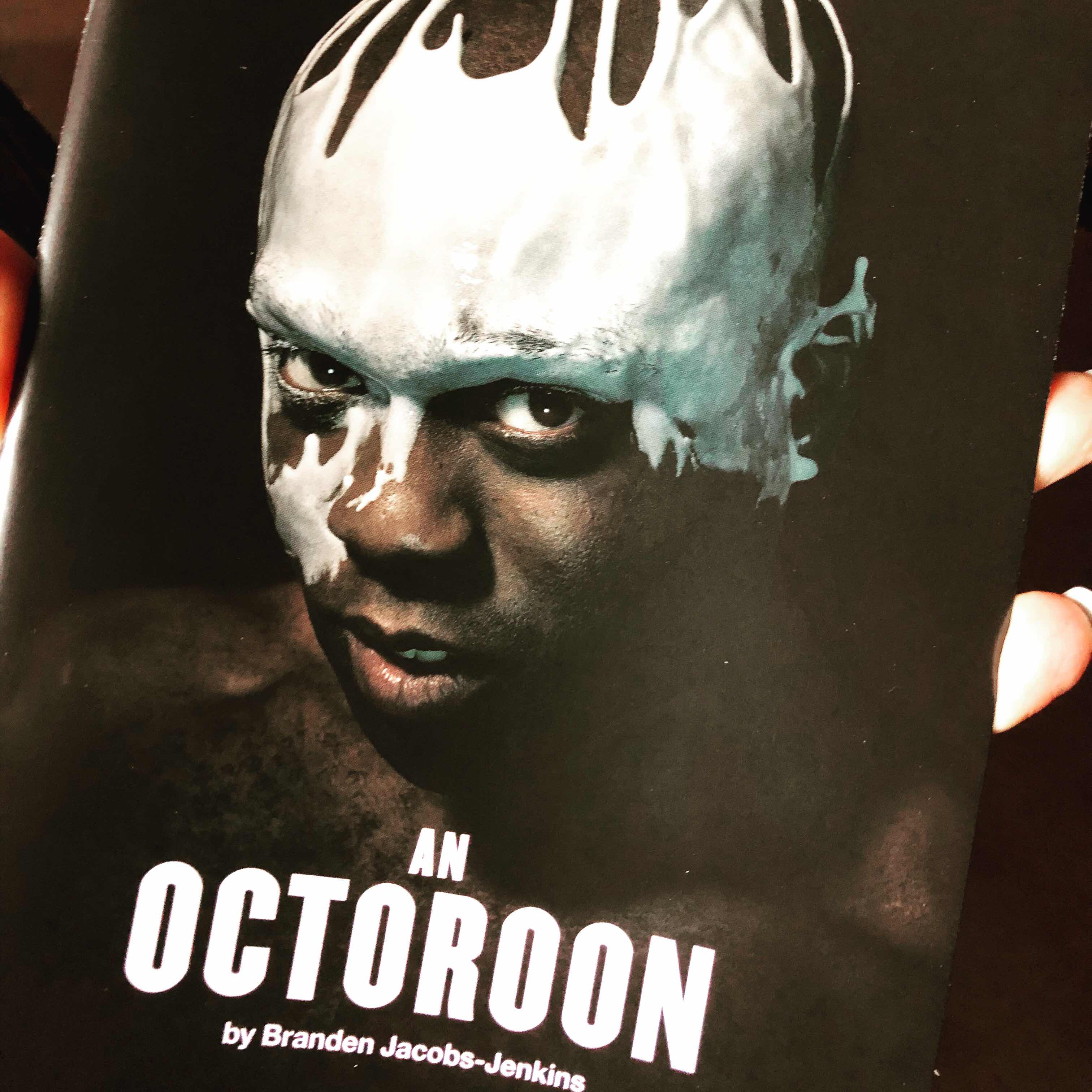 What BJJ - as he’s known in the character list, because things get meta from the very start - does so cleverly is create a show that speaks so eloquently of the historical challenges (to understate spectacularly) that black Americans faced, links them to those that they still face and - specifically - those faced by a black playwright. I enjoyed immensely the way he takes a well aimed sledgehammer to the idea that some (white) critics and (white) audiences have of ‘the black playwright’, ‘the black play’, ‘the black actor’ and ‘the black character’. The structure of the piece is so clever, the best use of the ‘play within a play’ setup that I’ve ever seen. Essentially, the idea is that we’re watching a modern black playwright’s update of a white playwright’s slavery-era race play, but, he informs us, said modern playwright can’t find white actors willing to be in it (because who wants to play a slaver?) and so he’s decided to play the white parts himself, in whiteface makeup. We then meet the original white playwright - Dion Boucicault, real life author of the original An Octoroon - who fills us in on how he can’t find enough black actors to play the black parts so his (Native American) assistant will be blacking up to play one whilst Boucicault himself will be painting himself red to play a Native American Chief.

It’s a bold and challenging idea which could be so, so tacky were it not for the skill of BJJ’s writing. There is not a single word in his script that is throwaway or unnecessary. Everything is planned, weighted and reasoned to the extent that it seems 100% not to be. An Octoroon is very funny - it is, at its heart, a satire - but it is also very serious and neither of these things are ever lost sight of. When it gets a bit meta, where things could get very pretentious indeed, it keeps its feet firmly on the ground through the play within a play structure and the use of the characters of BJJ and Boucicault as narrators who puncture any notions of luvviness and OTT theatricality immediately. A great example is in the final scenes of the play where they explain the nature of the ‘sensation scene’ and why all the big effects and melodrama are kind of nonsense that deserve to be dismantled even as the play with a play indulges in them. It’s a great sequence in a great play, much better than my shitty explanation suggests, and I totally fell for it.

It is matched by an equally strong production. Director Ned Bennett delivers something so sure footed, confident and innovative; by far the most innovative thing I’ve seen at the NT I think. Georgia Lowe’s design is sparse but incredibly effective and employs some great theatrical tricks for our authors to play with and explain. Elliot Griggs’ lighting is incredible, especially his counterintuitive and liberal use of darkness (usually complete darkness, even sans emergency exit signs) which is so disorientating and sometimes quite threatening. Strobe and bright red lights are used to similar effect elsewhere. It’s a perfect companion for a play which is equally disorientating at times. Theo Vidgen’s music is great and evocative, especially the choice to use a single live cellist on stage in the production (Kwesu Edman does a great job as said cellist). In a complicated and fast moving, literally, production Ivan Blackstock’s movement direction is also worthy of mention. All of this combines to give the production, much like the play, an atmosphere all of its own. And, amazingly, despite the fact I was sat in an allegedly restricted view seat in the almost always restricted view heavy Dorfman there are no sight line issues!

A small cast of eight, almost all of whom do at least double duty and, I think, all of whom are direct imports from the Orange Tree production, round out an exceptional piece of work. There are many highlights - Vivian Oparah’s thoroughly modern slave Minnie, Kevin Trainor bringing exactly the right amount of ham to his wacky collection of parts (including Boucicault), Cassie Clare’s tap dancing rabbit skills (no, really) - but the show belongs to Ken Nwosu who stars as BJJ and the two white leads of his play. Nwosu is extraordinary, barely offstage and, for much of the second act, playing as one of his characters against the other. It’s a feat of memory, energy and physicality which is pretty much unique. He is so confident, so sympathetic, so charismatic and so flat out talented. It’s one of the performances of my theatrical year, no question.

Overall, An Octoroon is a joy. An occasionally baffling, always surprising, completely unique joy. Though I now regret even more not experiencing it in the tiny Orange Tree, I’m so glad the NT has given it an extended lifespan because my god does it deserve one. And I will fight you if you disagree.

An Octoroon is in the Dorfman at the NT until 18th July. Tickets are mostly, but not completely, sold out - grab one now if you can.

I sat in seat P62 in the circle for this one and paid £18 for the privilege. This seat claims to be restricted view, but it’s absolutely not. I saw the show whilst it was in previews.