Fans of political satire and/or - how to put this? - utter bollocks, will no doubt look back fondly on that joyous moment in the 2017 General Election campaign where Theresa May, fresh from doing a massive and complete u turn on her social care policy, blithely declared “nothing has changed, nothing has changed”. Glorious in its brazenness and cavalier in its disregard for, well, facts; it was a highlight/lowlight of a campaign full of them.

I was put in mind of that now infamous line whilst watching Leave Taking, Winsome Pinnock’s seminal play on immigration and the black British experience, at The Bush over the weekend. To explain, before I get justifiably angry letters for comparing Winsome Pinnock to Theresa May, it’s the phrase I’m interested in, not the context and not the speaker (well, a little bit the speaker, for reasons I’ll come back to). Nothing has changed, nothing has changed. It could almost be the subtitle of Leave Taking. It could almost be its call to arms. 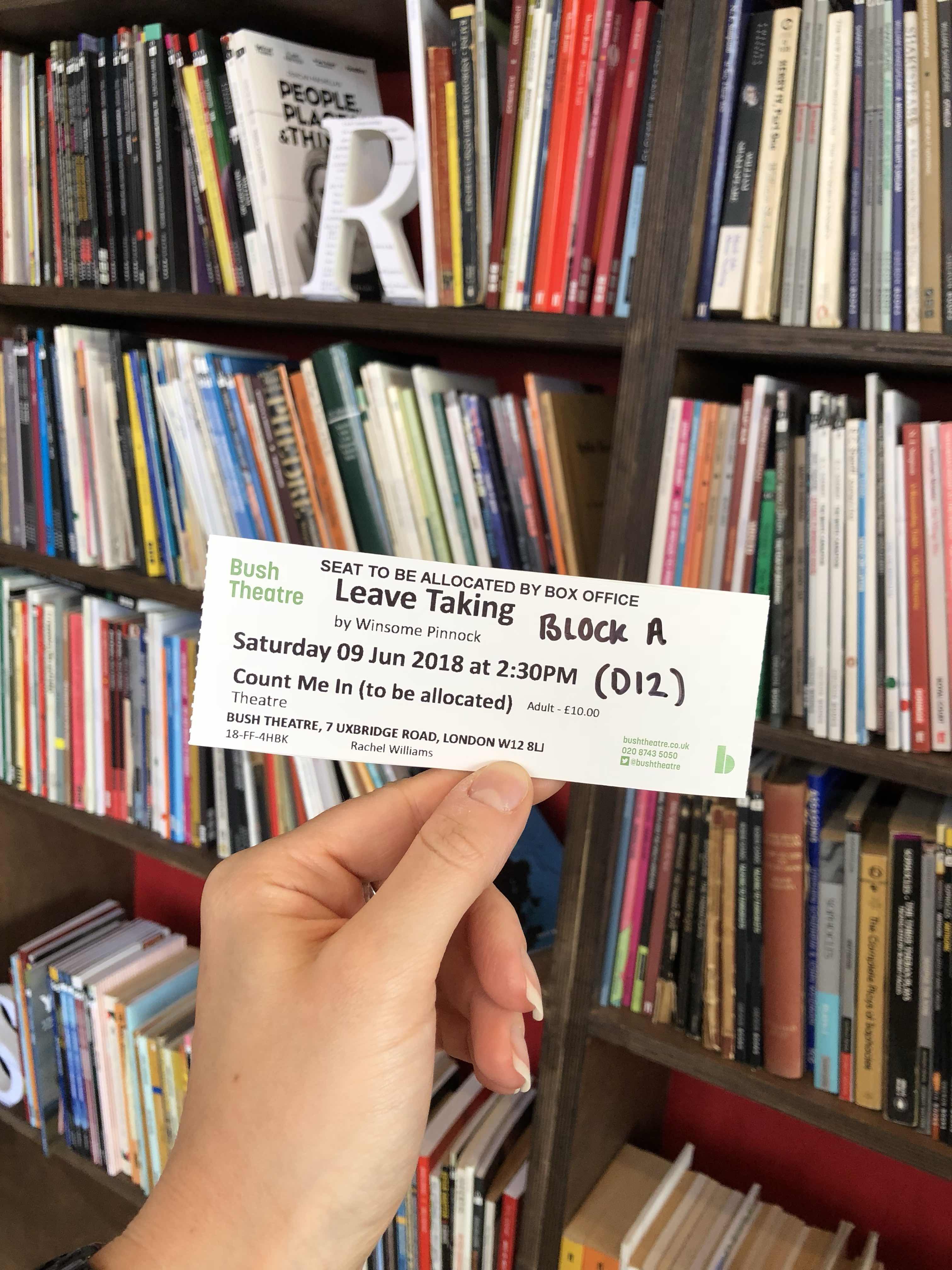 But I’m getting ahead of myself. Let’s actually talk about the play first. It’s brilliant, in short. Not only brilliant, but necessary. It should be taught in schools, all schools, and I would suggest that one of the reasons it isn’t is that Pinnock has the temerity to not be a dead, white man (she is none of those things, for the avoidance of doubt). Leave Taking tells the story of Enid, a Jamaican immigrant to the UK, her daughters, Del and Viv, and her fellow immigrant friend, Brod, as they move through life as a Jamaican family in London. Pinnock has such a gorgeous and unique voice that speaks at once to the specific experiences of the black (Jamaican) British community and humanity in general. Leave Taking itself is many things: very funny, very sad, sometimes difficult, sometimes challenging, often raw and always utterly contemporary. This play was written thirty years ago; it could have been written literally yesterday. Partly that’s because nothing has changed, nothing has changed, but it’s also because the play has so much to say about feelings of outsider-ness and the complex mess of an emotional web that is identity that it becomes almost timeless. Any human being with an ounce of self awareness who sees Leave Taking will identify with it, even if some of the specific cultural references are not relevant to you. Everyone struggles with their identity at one time or another unless you’re some kind of fucking robot. And, when you do, Winsome Pinnock has something to say to you.

The characters are also a complete joy and manage, too, to be both utterly specific to their identity and experiences but utterly relatable to everyone at the same time. Through their voices, and Pinnock’s, what Leave Taking becomes is one of the most eloquent and complex studies of immigration and identity I’ve seen on the stage. And, maddeningly, it’s in its tackling of immigration - and the racism that met it - that I drew Theresa May’s ode to stability to mind. There are heart rending accounts of the racism, overt and subtle, in this play that give it some of its most contemporary moments. The direct parallel to the Windrush scandal - which, of course, is the other sense in which it made me think of our beloved leader - when the elder characters are discussing how they had to pay to get the documents that proved they were British when they’d felt proudly British ever since their immigration is the most obvious example (I actually checked the playtext to see if this scene was a new addition. It’s not. And that’s deeply depressing). But there are plenty more and, for me, the final scene in which matriarch Enid discusses how people just don’t see her, just don’t care, is the most touching and resonant. Because, really, is that untrue today? Has anything changed, anything changed?

Before I get any more rantypants, let’s move on. Because there’s nice, happy stuff to talk about in the brilliance of this production of Leave Taking. The Bush’s AD Madani Younis is in the director’s chair here and he’s on top form. He has such a clear vision of what this play and why it’s important (now) that just sings through every scene. You don’t see that so often these days. Visually, I think The Bush has done better (and I’m concerned for the physical integrity of their water effect) but Rajiv Pattani’s gorgeous lighting is very much an exception. He does some very clever - and effective - things to pull the audience’s focus where it needs to be at key points, something done with particular deftness and skill in the aforementioned final scene. The Bush’s concrete garage vibe (I love it, this is not a criticism) lends itself to innovative lighting so well and Pattani has nailed it here.

There is also, like, a lot of happiness to be found in the frankly slightly annoyingly brilliant ensemble of actors. There are five characters in Leave Taking - Enid, Del, Viv, Brod and obeah woman Mai - and, with the play staged in the round, the already unforgiving Bush auditorium provides nowhere to hide. Which is fine for these guys, they don’t need it. Adjoa Andoh, as Mai, is my highlight. Having seen her in the grand total of two things (both in the past six months) I have concluded that Andoh is one of those actors I would watch in literally anything. I’m convinced she could read out a phone book and give it emotional depth and complexity. She’s on top, top form here as the wise and weary Mai; a character who only really unveils herself after the interval but you know as soon as Andoh stalks into the space at the top of the show that there will be depth to come. (Also, she spends a lot of the show crouched at the edge of the space in the sort of deep squat holds that the rest of us can only dream of. I want to work out with her.) Seraphina Beh as ‘tearaway’ Del is a complex joy. She gives a strongly nuanced performance of, in some senses, an archetypal British teenager who is so much more than that - and more than anyone but Mai gives her credit for. Providing some much needed light relief, Wil Johnson, is endlessly watchable as Brod. He’s a sort of comedy character but in Johnson’s hands you always laugh with him, not at him, which means when he does get serious or angry the audience 100% go with him. Sarah Niles’ Enid provides the play’s heart, and some soaring set piece speeches, and the way she quietly works the space and the audience make the realisation of how sad she is, and why, really crushing. Rounding out the quintet, Nichelle Terry’s Viv has perhaps less to do than the others but does it equally well. The big moments she does get - particularly her small Act 2 rebellion - are handled faultlessly. They’re a good group, all in all.

As you may have gathered, I was into Leave Taking in quite a major way. It’s such a great play and such a stonking production - and, surely, the most prescient revival ever in the history of theatre. Go and see it, laugh, think, cry and get angry at how surprised you are that this isn’t a new commission.

Leave Taking is at The Bush until 30th June. Grab the last remaining tickets whilst they exist.

My seat for this one was D12 in block A and I paid for it. Thanks to The Bush’s super Count Me In scheme (where you pay for a non-specific seat and the box office allocate you into a gap on the day - perfect for solo theatregoers or those who don’t like their friends and family) I only paid £10. Outside of CMI, it would have cost £30.
Posted by Billi at 14:22