All bad in their own way, but I would argue the absolute worst thing a piece of theatre can be is boring. It’s not something that I can accuse much that I see of being to be honest. I see plenty of stuff that I would argue is bad, but very seldom boring.

Boring is certainly not something I would ever have thought to accuse The Bridge theatre - home, of course, until recently of my beloved Julius Caesar - of being. And yet here we are. Their current production, Nightfall, counts as two and a bit hours of the most bored I have ever been in a theatre. 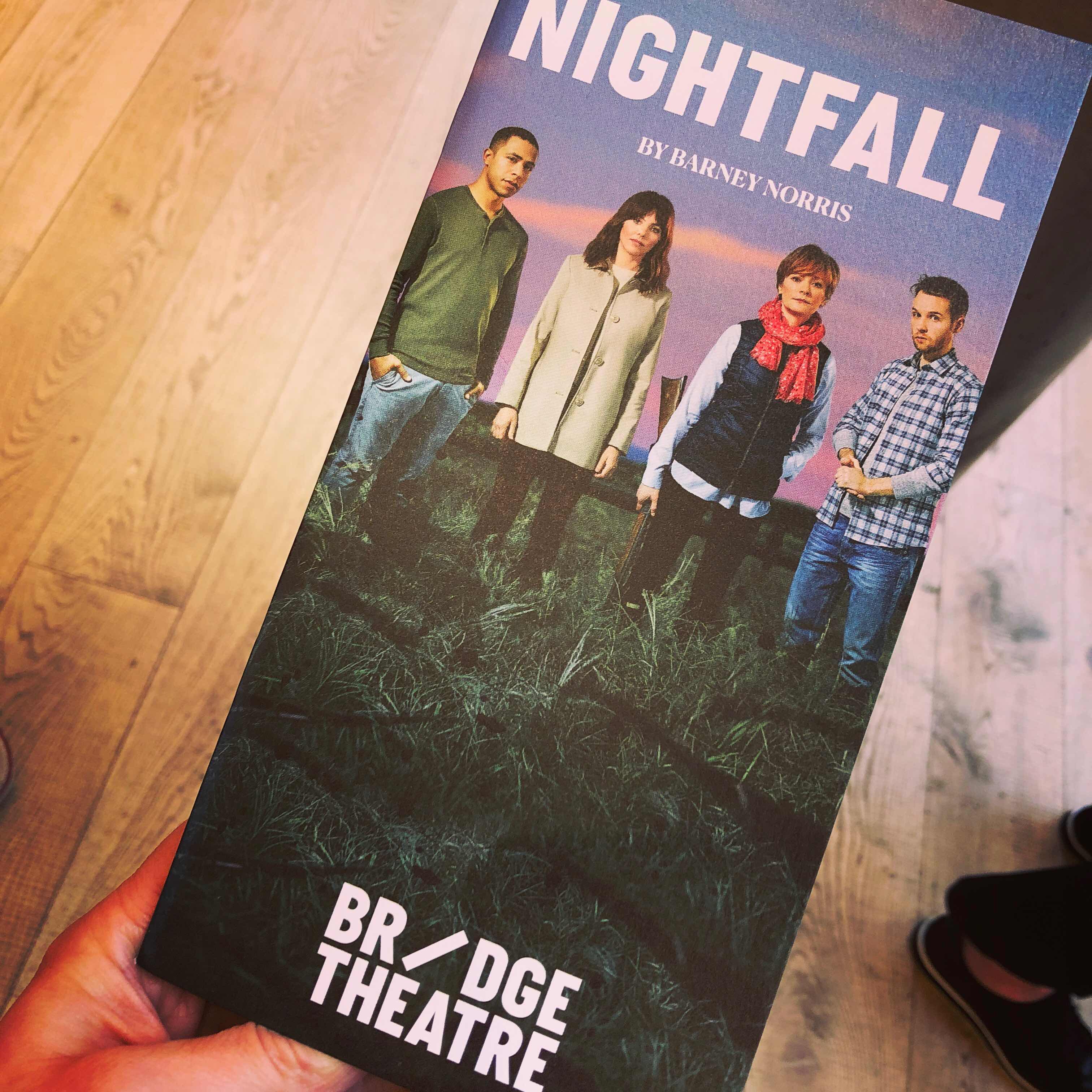 To misuse a line from Hamlet, the play’s the thing that is 100% of the problem. With all due respect to Barney Norris, whose earlier work everyone seems to agree is brilliant, Nightfall is just a very inconsequential play. To give it its due, it does contain some very nice lines about grief and descriptions of it that feel very apt and very occasionally somewhat profound. But beyond that? The plot is dull and predictable, the characterisation is slight (the mother character, Jenny, is perhaps the least sympathetic on the London stage at the moment and not in an intentional way I suspect) to the extent that what happens to the characters is entirely irrelevant and the whole thing is just a bit meh. It’s very difficult to care about anything happening to the awful, awful characters and their dreary story. It is, ultimately, an almost instantly forgettable piece. It’s not helped, frankly, by being at The Bridge either. This is a small play in a big venue and it just deosn’t feel right. Perhaps in a more intimate setting, the play might connect more. I doubt it, but it might.

It’s a shame the play is so weak because the production is much more The Bridge’s usual high standards, both technically and aesthetically. Rae Smith’s design is undoubtedly the star. The set looks like it’s walked down the South Bank from the Tate Modern, it’s so beautiful, evocative and artfully decaying. The huge oil pipeline that cuts the set in two works as both visual and metaphor; it’s almost more effective at articulating the play’s take on the decline of rural Britain than the play is. I loved the use - and the smell - of real grass and plants too. William Galloway’s video design, used to portray the changing sky behind the set, is equally gorgeous and effective. It combines with some lovely incidental music from Gareth Williams to produce something that looks and sounds far more appealing when the cast and the play aren’t involved.

The cast of four work hard and give solid, if unspectacular, performances. The highlight is undoubtedly Ophelia Lovibond as spirited, damaged daughter Lou. The rare moments when this play displays some signs of life are almost all down to her. She has a couple of setpiece speeches in particular which are great. Ukweli Roach does some nice work - and has the best written and most sympathetic character to play with - largely in support of her. Claire Skinner is enjoyably evil as the aforementioned Jenny but I never really bought the fact that she was acting as she was because of grief. Partly this is because her motivations aren’t really explained or explored in the script but also because I didn’t quite buy her performance either (which is a shame because generally I think she’s great).

Overall, this piece is a big disappointment for me and not at all what I’ve come to expect from The Bridge. The theatre was at least a third empty when I saw it - on a Friday night - and it’s hard to say other than that it deserved to be. The saving grace of this though is that there are great tickets available and great upgrades too. I went from back row of the circle to sixth row of the stalls! If you’re planning on seeing Nightfall (and some people love it by the way) I’d advise booking a cheap seat you’ll almost certainly end up sitting somewhere better. And The Bridge is a great theatre to experience anyway, even if you just go for the building and the interval madeleines.

Nightfall plays at The Bridge until 26th May.