The Gielgud is one of those Theatres of a Certain Age.

You know the type I mean. Pretty, but functionally questionable. Minimal ladies loos. Extortionate ice cream. Seats with economy class flight-level comfort, unless you're in Band A. Certainly not optimal for watching something three hours plus.

It's not the sort of theatre I would necessarily have chosen to see The Ferryman in, in other words. A play that seems to have entered modern theatrical legend on account of two things, its length and - thankfully - its quality. Or to paraphrase The Guardian Guide, bum numbing but worth it. 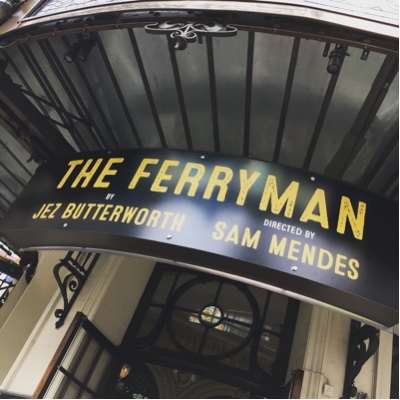 There is no question that, at three hours ten (including an interval and a weird and superfluous five minute 'pause'), this is a long piece. But, hey, some of us have seen all seven and a half hours of Angels in America in one day. Three hours ten is fuck all.

The Ferryman shares something else with Angels too: it's complete brilliance. There is no question that every single star in The Ferryman's epic haul of five star reviews is justified. More than justified. Inadequate to do this stunner of a show anything like justice.

The Ferryman has excellent pedigree. Written by Jez Butterworth and directed by Sam Mendes, it's a transfer from The Royal Court that tells the story, ostensibly, of the Carney family in Troubles-era Northern Ireland. Part pitch black kitchen sink comedy, complete with racist elderly aunt, part Othello-esque heartbreaking tragedy, the writing is - and I hesitate to use the word but I think it's merited here - genius.

Because what Butterworth has conjured up here is incredible. Not only is the writing incredibly rich, creating a world of characters, places, histories and situations that make you feel you know the Carneys and, indeed, that you've known them for a long time (clever use of historical touchpoints certainly helps here), it is bitterly funny. The rounded cast of characters and humour mask something much darker though. There is a danger fizzing through this play that is elusive at first - you know shit is going to go down but you don't really know how. And you don't find out how until the final scene which, though I won't spoil it, is utterly extraordinary for pulling off the bizarre duality of being both completely inevitable and completely, devastatingly unexpected at the same time.

This is the real genius of The Ferryman. You never know really what you're watching and every time you think you've cracked it - BAM - the plot changes tack. Even basic plot points, such as who's who in the family, aren't as they first seem. To pull this off whilst maintaining a coherent, plausible and well paced story is just exquisite plotting.

Thematically too this is a great piece. Butterworth deals with a lot of big themes, each of which alone could create something interesting, and somehow melds them all together into something truly wonderful. Loyalty and family is an obvious starting point. Who or what should you be loyal to? Who or what is your family? Assuming you know that how do you protect them? And what do you protect; their past, present or future? Loss also gets attention. What does loss mean? Can someone who's still there be lost? Can someone who's not there not be lost? Can you lose something that was never yours in the first place? And running through all of this is the past. Can you move on from it? Escape it? How? Is your past somehow genetic, bound to repeat down the generations? The Ferryman plays with all of these ideas but refreshingly never offers judgement on any of them. It would be a gift of a play to study; think of the essays you could write!

If the writing is the star of this show, then the cast runs it a close second. The Ferryman is a real ensemble piece and perhaps the biggest joy of the acting here is seeing a genuinely great, unselfish, perfectly balanced ensemble working as one. That said, it would be remiss not to make a few observations about the individuals involved, principally how in the sweet fuck is this Paddy Considine's stage debut?! I mean this in two, equally complimentary, ways: 1) how on earth has an actor of his calibre never been tempted onto the stage before, and 2) how on earth can an actor on debut deliver a performance as nuanced, controlled and quietly dangerous as the one he delivers, as family patriarch Quinn Carney, here? He is amazing, electrifying to watch and commands the stage totally. I hope theatrical casting agents elsewhere are taking notes!

Other performances that merit a quick mention are Laura Donnelly, a study in sadness and heart as Caitlin Carney; John Hodgkinson who works I suspect much harder than appearances would suggest to make Tom Kettle, the least effective character for my money, into someone believable and touching (the proposal scene guys!); and Rob Malone and Tom Glyn-Carney, as Oisin and Shane respectively, who bring the real spark and danger to proceedings. Everyone is well served by Sam Mendes' light touch, natural direction and a stunningly detailed and atmospheric set (though were the real animals really necessary guys? No, that's right, they weren't).

It is, at this point in time, deeply boring to say that The Ferryman is extraordinary theatre but it really truly is. Sublime acting, pitch perfect direction, great set and some of the best writing you will ever see. Believe the hype and shell out for a ticket immediately. Even the queue for the ladies' is worth it.

The Ferryman is at the Gielgud Theatre until 7th October.
Posted by Billi at 22:45 No comments: