As a rule, I don’t like young people. With their optimism and their energy levels that aren’t based entirely on caffeine and their, well, youth. How dare they.

Where was I going with this? Oh yeah, the National Youth Theatre of Great Britain. I’m prepared to make an exception for them. Their optimism and energy and youth is something that I actively admire. And, more to the point, it’s something that always makes them a theatre company worth watching. 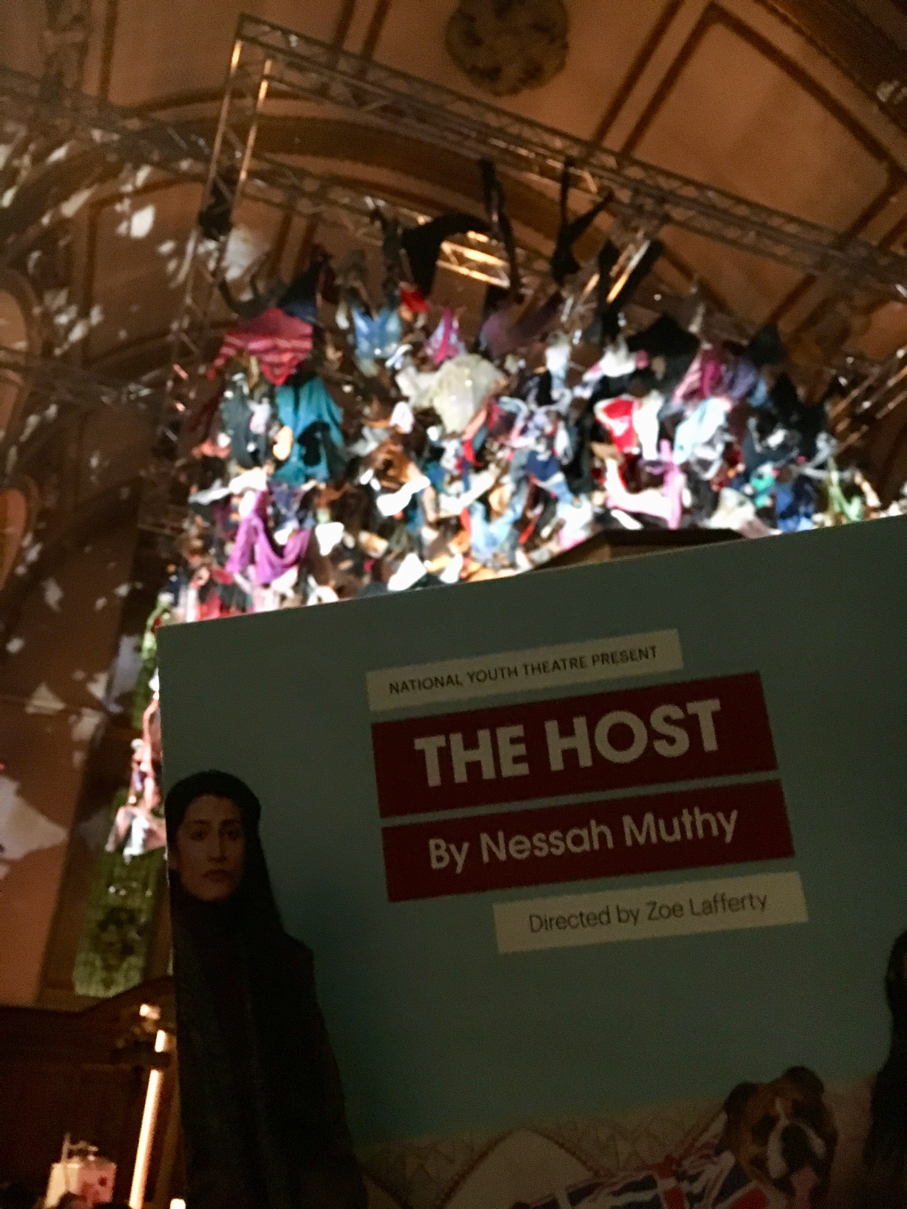 Their latest production is a revival of something they’ve done before, Nessah Muthy’s The Host. Roughly speaking, The Host is a play about the refugee crisis from the perspective of a Syrian refugee, Rabea, and the working class British woman, Yasmin, that hosts him whilst he’s trying to get his papers in order. Yasmin’s family life is a mess and her half sisters (who, unlike Yasmin, are white) have fallen through the cracks in the welfare state. If it’s not obvious from that description, this play is trying to tackle some big issues: not just the refugee crisis, not just race in modern Britain but the whole concept of otherness and belonging. The whole concept of family, I suppose. It’s not entirely successful in dissecting them all, but it definitely lands some big punches across the board. The scene between Yasmin and big sister Pearl where they discuss/row about the issue of their different races is really strong, as is the scene where Yasmin explains her complex family to Rabea and pines desperately for her dead mum. It rather runs out of steam at the end, but there’s some real moments of loveliness to be had here.

The cast is of course always the primary joy of an NYT production and that’s certainly the case here. Rebekah Murrell is absolutely fantastic as Yasmin; a bundle of contradictions and emotional turmoil always at equal risk of exploding with rage or sadness or embarrassed kindness or all three. I don’t often mention this, but the way she uses her voice is exceptional too. Zakaria Douglas-Zerouali is a perfect foil for her as Rabea, fighting his own desperate sadness in an entirely different way. He brings some real depth of emotion to the table as well as a natural affinity for humour. These two are surely destined for success, write their names down somewhere. Phao May, Amy Parker and - particularly - Taylor Keegan do some nice work as Yasmin’s half sisters too, giving them a depth that I’m not entirely convinced is otherwise present in the text.

It’s a shame that the production itself doesn’t do justice to the company or the play. There is one overriding issue here: this revival is staged in a church (St James’s Piccadilly to be precise). The consequences of this are many and all negative - crap acoustics (some of the dialogue was completely indecipherable from where I was sat, despite the cast being miced up), extremely restricted sight lines for I guess at least 80% of the audience and an hour and a half sitting on the most uncomfortable form of seating ever invented, church pews. I get that the production is here to sit alongside an art installation, Suspended by Arabella Dorman (it’s made of clothing abandoned by refugees in Lesbos and it’s well worth a look if you’re in the area), and the couple of times the installation is lit so it becomes part of the production are very atmospheric. It’s not enough, though, to justify the detriment this venue does to the play and the cast, at least not for my money (and spine). I mention this not to be crotchety or because my back hurts from the pews but because I’m irritated on behalf of the excellent cast who are doing fantastic things on the stage that much of the audience can’t see - or even hear - properly. It’s not fair to anyone involved.

Still, there’s much to admire in The Host. And there’s no questioning the good intention or the boldness of the NYT in taking on this play in this venue at this moment. The young cast are a joy to watch, completely worth your time if you’re in any way interested in the future of British theatre. Maybe bring a cushion though.

You have two more chances to catch The Host at St James’s Piccadilly, it closes on Saturday 3rd February. Skates on.