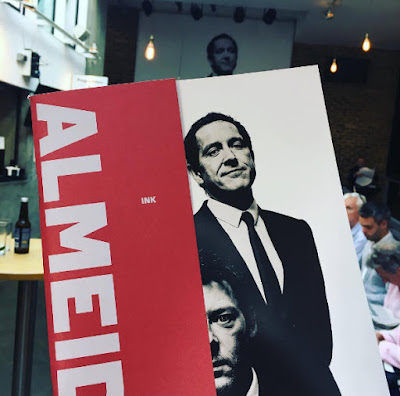 Ink is a play about the birth of The Sun newspaper under the considerable personalities of its founding editor, Larry Lamb, and its owner and proprietor, Rupert Murdoch (perhaps you’ve heard of him). A juicy enough prospect in itself. When you throw the fact that it’s written by James Graham, stars Bertie Carvel as Murdoch, is directed by Rupert Goold and staged at the Almeida into the mix it becomes positively orgasmic. Pass me a cigarette because I’m done.

There shall be no beating about the bush here. I fucking loved this play and this production of it is about as good as it gets.

Ink is the second of five James Graham plays I will see this year, following on from This House which regular readers will recall I had some Strong Feelings about, and it’s increased my enthusiasm for his work no end. It is whip smart, very funny and pleasingly non-judgemental. There’s a real enthusiasm for the topic and a level of humanity in Graham’s writing and characterisation that is so refreshing - especially given the people and the institution involved here, about which it’s difficult not to have an opinion.

The whole approach to Ink is so fresh and exciting. It presumes no prior knowledge, it offers no moral judgement, it is in no way an issue play. It simply tells the story brilliantly and asks some vital questions about the role of the press in a modern society; it is for the audience to provide their own answers. The parallels here with the mode of storytelling that Lamb and Murdoch set out in the play’s opening scene are presumably not accidental. It is also a relief that contemporary references are not overdone, as must have been the temptation, so that when they are used they are much more impactful.

It is, in short and like This House, an absolutely fantastic play. It would be worth seeing even in a crap production. That the Almeida’s production is anything but crap is an added joy.

‘Anything but crap’ is a bit of an understatement too. This is a production every bit as good as its play. Rupert Goold’s direction is pacey, fluent and honest (though if I do have a criticism of this production overall it’s that it could stand to be ten minutes shorter). Bunny Chrstie’s set, a muddle multi-storey mess of a newspaper office, is evocative and functionally brilliant, bringing a sense of anarchy and excitement to proceedings. The lighting is great, especially the use of my old favourite, the bright white spot, as a highlight at key points. The choreography and music, sparingly used, is incredibly effective and is becoming one of my favourite features of James Graham shows.

The characterisation is one of the areas where Ink is most different from This House. Whilst the latter was a big ensemble thing, Ink is pretty much a two man show. The ensemble in Ink is certainly less crucial than their Westminster equivalents though they are excellent, the women in particular - Sophie Stanton as Joyce Hopkirk brings real heart to the table whilst Pearl Chanda is spunky and strong as Stephanie Rahn. (That Graham writes fantastic parts for women is yet another reason to love him.)

Richard Coyle takes the biggest role in terms of stage time, though I would argue not the lead role, as Larry Lamb and uses every minute extremely well. His Lamb is complicated, conflicted, slimey and ultimately sympathetic. He is particularly good at portraying the pressure that Lamb is under from all quarters, especially as the action ramps up towards the end of act two. And he leaves enough shades of grey in his performance to allow the audience to ask interesting questions of his motivations, chiefly why is he really so obsessed with beating The Mirror’s circulation figures? It’s a brilliant, nuanced piece of acting which does a lot to shake up the perception of a man who, one suspects, an Almeida audience is not predisposed to like.

Speaking of which, playing Rupert Murdoch to an Islington audience - or any audience for that matter - and presenting them with someone they don’t hate is surely deserving of some kind of special award. Certainly it takes a special performance from a special actor. From my previously expressed sentiments, it should come as no surprise that I rank Bertie Carvel squarely within that category. His Murdoch is a genuinely fantastic performance: physically unrecognisable, perfectly accented and utterly surprising in its characterisation of the man as socially awkward and kind of shy but utterly and completely driven. He’s not physically on stage that often (to my chagrin) but he is on stage at all times. That takes some doing. As ever, there’s a joyously old fashioned physicality to what he does which is as fascinating to watch as it is effective. He doesn’t so much walk the stage as stalk it, slightly hunched over, suggesting a barely suppressed rage that is allowed to burst through only once and so feels even more dangerous the rest of the time as a result. He achieves something completely remarkable, ultimately: not only do you forget that you’re watching him as an actor, you also forget that you know who Rupert Murdoch is as a person. It’s fantastic and a thrill to watch. Why he isn’t everyone’s favourite actor is a fact that continues to baffle me.

Ink is a fantastic production of a fantastic play. It’s relevant, timely, achingly well written, without an iota of judgement or preachiness. It is superbly staged and home to some of the best, most fascinating acting you will see. And, perhaps most importantly, it is further proof that my Bertie Carvel obsession is justified (and also growing).

Ink is at the Almeida until 5th August (day tickets and returns only at this point, deservedly). Rumours of a West End transfer for the autumn abound.