Theatre Review: Sad About the Cows

First things first, how good a title for a play is Sad About The Cows? Pretty bloody good I would argue. 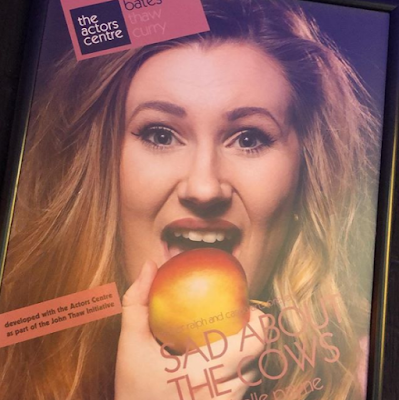 It's also a pretty bloody good play, as it happens. Written and performed by Michelle Payne, it tells the story of Rachel (douze points from me for the name, obviously) who seems like a normal, fun young woman until the demons of body image get their pesky claws into her. As an obsession with Ariana Grande and the Victoria's Secret fashion show become an obsession with counting calories and eventually anorexia, the show charts her state of mind and body with - eventually - a happy ending.

It's a fab little piece, really well written: punchy, funny and ultimately quite uplifting. There's a lot in it that so many women will identify with, even if you've not taken things quite to the extreme that Rachel does. There's a great line about the fear of relaxing your discipline with you diet but still keeping hold of a sense of control that I wish I'd written down because it was frighteningly spot on. Ditto the various lines about feeling guilty for more or less everything you do as a woman - eating meat, not always having a reusable bottle, having something approximating a normal looking body.

Structurally it's clever too. The audience is cast as others members of some kind of online forum for people taking weight loss to an extreme which allows for a chatty, conspiratorial atmosphere. It's also kind of discomfiting given what the consequences of our 'support' for Rachel's lifestyle ultimately means. It also personifies her eating disorder as a separate character who we never see. The gradual realisation of who and what 'Anna' is was undoubtedly one of the play's strongest suits for me.

I also think this play is a great use of the short, one person format. You can't really argue that its subject matter, even the most extreme bits of it, are news or that they aren't discussed in a myriad of forms, dramatic and not, elsewhere. But the joy of the one person format is that this sort of doesn't matter, because you buy into this individual story and only access the wider debate through it. This show never for a moment feels like an article in Women's Health or Grazia, even though its content definitely could be.

In the tiny Tristan Bates Theatre (a new one for me, and it's cute), Payne gives a great performance as actor too. She's super watchable and charismatic and carries a heavy story really beautifully. I genuinely felt like I knew Rachel by the end of the show and that's a testament both to Payne's writing and acting. Natasha Kathi-Chandra's light touch direction, Valentina Turtur's simple set and Ruoxi Jia's lighting (loved all the blue) give her excellent support.

Sad About The Cows is a really engaging piece that women everywhere will definitely recognise and empathise with. Michelle Payne utterly sells it, both as playwright and actor. Also? It starts at 6:15 and is only 45 minutes long which is like absolute heaven for this always tired theatre fan. Highly worth a tiny amount of your time.

Sad About The Cows is at the Tristan Bates Theatre until 25th June.

My ticket for this was kindly provided by the producers. It's unreserved seating and a ticket would normally cost £12.