If I were to draw up a list of my absolute favourite people in theatre, Yaël Farber would 100% be near the top.

I don’t really like the word visionary, and it’s thrown around a lot, but Farber definitely is one. The imagination of her productions is incredible and nobody builds the world around a play like she does. There’s no question that she’s an aesthetic director, in that staging plays a huge part in her world building, but she always chooses to work on plays of significant substance as well. 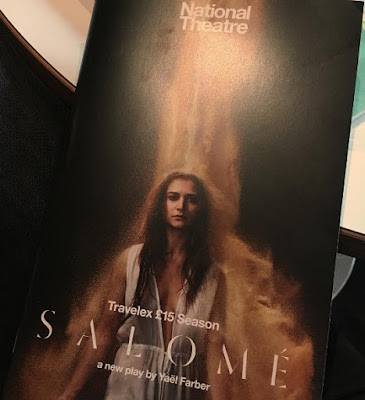 In her new production, Salomé at the National Theatre, Farber is on double duty as both director and playwright, though in reality even that probably does her influence on this production a disservice; this truly feels like Farber’s baby and Farber’s world in every way. Her new version of Salomé tells the Biblical story of the dancer girl who demanded John the Baptist’s head on a plate but with one major amendment: it places Salomé herself back at the heart of her own narrative. It’s thoroughly depressing how radical this feels. Combined with Farber’s usual aesthetic flair this creates a production of this oldest tale that feels completely modern. And ever so slightly bonkers, which is also pleasing.

The creation of Farber’s Jerusalem (for that’s where we are) begins the instant you enter the theatre with a very distinctive smoky smell and a barren, black stage lit with bright white spotlights. This forms the aesthetic base for the entire production, with the harsh white spots used incredibly effectively as highlight points, directing audience gaze in some unexpected ways. It also adds to an air of voyeurism that is maintained throughout the production, important given Farber’s thematic focus on colonisation of the female body, which is also highlighted by the continued presence of the entire cast on stage more or less all the time.

Music and sound is a huge part of this production, and there is a soundscape of both live and recorded sound that runs constantly throughout the show (the resultant, echoey use of microphones by all the cast is a minor bugbear) courtesy of sound designer Adam Cork. The highlight of this is the presence of two singers in the cast who provide a live soundtrack for Farber’s world - their voices are exquisite and the music they create adds considerable depth to the setting.

This is also a production that’s constantly in motion. The Olivier’s huge stage is used to great effect here with the revolve in near continual use throughout the play, moving cast and setting around in a way that is disconcerting and presents something of the tumult that Salomé and her story cause in her world. The other thing that features frequently, and is often moving, is sand. I’m not sure I altogether understood this as a reference point but as far as I can interpret it suggests a connection to the land, hence why it’s Salomé herself who is often interacting with said sand. Or perhaps the key is in Farber’s script - “the sand erases everything” - and it’s actually a comment on the way that Salomé’s story, her real story, is forgotten. Or perhaps I’m over thinking this and actually the sand is just there because it looks cool. But I doubt that in a Farber production.

As already alluded to, thematically Farber’s Salomé pins its colours very firmly to the mast: colonisation, of the land and of women’s voices, bodies and stories. There is no question that it works these themes very well, if anything it is occasionally overplayed and feels a bit Guardian columnist. The contemporary resonance is obvious and, thankfully, merely alluded to. There are some striking passages of text around the intentions of the coloniser, benign and not (I happened to be reading a book about the Nuremberg trials when I saw this show and was really struck how one passage in particular, Pontius Pilate talking about his hatred of the Jews, could have come straight from the transcripts). The points around the colonisation of women are arguably more interesting though, for me, slightly undermined by the fact that the only character who appears naked in the play, Salomé, is female whilst the male character who is specifically described as being naked, John the Baptist, is clothed. Though her nakedness does sometimes feel empowering - as during the powerful, decidedly unerotic dance of the seven veils sequence, which is great - for a lot of the time it simply feels like the classic Game of Thrones nudity double standard - women must be naked, but men absolutely cannot be. However, I realise this is more a question of interpretation than anything else and, in context, it certainly is not gratuitous.

The aesthetics are undeniably the star of this production which leaves relatively limited space for the cast to make much of an impression. To the extent they do, Paul Chahidi is a beautifully creepy Herod (though I didn’t quite buy his more straightforward ‘overcome with lust’ scenes) and Isabella Nefar is a striking Salomé. The standout though is Olwen Fouéré as Nameless (the older Salomé who serves as the narrator of the story) who gives one of the most unconventionally charismatic performances I’ve seen in a long time. She is utterly compelling - I could watch her for hours.

I was completely captivated by Salomé. It’s a short play (no interval) but is so enchanting and such a complete example of Yaël Farber’s unique brand of world building. It’s a beautiful thing and is absolutely worth your time and money.

Salomé is in the Olivier at the National Theatre until 15th July.