The phrase ‘Tony Kushner musical’ is definitely one that will get my attention. Expand that phrase to ‘Tony Kushner musical, transferring from Chichester, starring Sharon D Clarke’ and I’m basically sat outside the theatre weeks before tickets go on sale waiting to give them my money.

Caroline, Or Change is the aforementioned ace sounding musical. It’s transferred, after a critically knock out run in the Minerva at Chichester, to the Hampstead Theatre (a venue I normally highly rate). It tells the story of Caroline, a black maid in a white Jewish Louisiana family’s home, and how the change in the pockets of the small boy she helps look after fundamentally disturb her life. 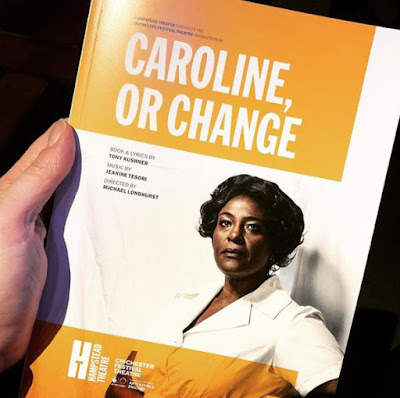 Now then. Everything I’m going to say in the rest of this post is predicated on one fact: from where I was sat - the back row of the circle, not the cheapest seat in the house - I couldn’t hear the performers properly, or sometimes at all, over the orchestra. I don’t know why this was (poor acoustics? crap mics? bad sound design? the fact that the band is raised in this production to be level with the circle?) or whose fault or whether it was something that just affected that one performance. But it was a serious problem. So many of the lyrics were just undecipherable over the band which in any musical would be a problem, in one that is through-composed it fundamentally stops you from following what’s going on.

This makes reviewing the show a bit problematic. My experience of it is so clearly impacted by that technical issue, but that’s not the fault of the cast or the writers. But how else can I review it other than based on my experience?

There obviously is no other way, so what follows here is as fair a review as I can write based on what I saw and heard (or didn’t hear).

It’s fair to say that this is not my favourite Tony Kushner piece. Which is obviously by no means to say it’s bad - rather like James Graham, even the worst Tony Kushner is better than the best of many other writers. Thematically, it’s interesting and complex. The interplay between the Jewish and black characters and their perceptions and experience of the civil rights movement is particularly well done. I also enjoyed the skewering of middle class white privilege and the thoughtful portrayal of very different women being crushed by domestic change and pressure even as they sail through more significant personal and political events. It does feel a mite too clever for its own good though - from what I could make out of them, the contrasting songs about JFK and his legacy served no particularly useful purpose - and occasionally feels like something akin to a Tony Kushner paint by numbers exercise. I never quite got the feeling that the plot hung together particularly well either, though this is one area where I’m more or less certain that not being able to hear so many of the lyrics was the problem.

Jeanine Tesori’s music is similarly complex and I enjoyed the playful inclusion of so many styles and occasional borrowing of other existing melodies. I can’t say I found any of it particularly memorable (possibly this is because, having seen Hamilton so recently, there’s no room in my brain for anything but My Shot) but Roosevelt Petrucius Coleslaw is great fun, Mr Stopnick and Emmie the definite high point of the show’s politics and Lot’s Wife a proper showstopper (especially in the hands of the majestic Sharon D Clarke).

Sound issues aside, the production is extremely competent as well. Fly Davis’ design is technically clever and visually fun. Michael Longhurst’s direction is pacy and natural. Ann Yee’s choreography is a real highlight, effective, good looking and characterful. The Hampstead stage works surprisingly well and the sightlines (in the interest of balance) are properly thought through.

The cast is kick ass. The reliably excellent Sharon D Clarke is, reliably, excellent as Caroline. She is such a good actress and her voice is so silky and beautiful. She’s on great form here; sadness and heart and fear personified. Working with significantly less sympathetic material as the uptight Gellmans, Lauren Ward and Alastair Brookshaw are also strong. They make their characters if not entirely sympathetic then at least people you can understand. The real stand out for me though was Abiona Omonua as the headstrong, rebel Emmie; a charismatic, agile and energetic presence who you really miss when she’s not on stage. The quality of the cast made the sound issues all the more frustrating.

Look, I’ve tried really hard but at the end of the day it’s so hard for me to overlook - and forgive - those bloody sound issues. It’s so fundamental to any production, but especially a musical, that the sound is done right, otherwise what’s the point? Maybe if I’d been sat in a different (more expensive?) seat or gone on a different night I’d be raving about this show. But I didn’t and so I’m not.

Caroline, Or Change is at the Hampstead until 21st April.

My seat was Q3 in the circle. It cost £27 and I paid for it. I saw the final preview.
*You’ll be seeing this statement - where I sat, how much the ticket costs for this production, whether I paid or had a free press ticket and if I saw a particular performance (eg a preview or press night) - at the bottom of all of my reviews from now on, because I think critics - even hobby ones - need to be honest about this stuff. h/t @WestEndProducer*