It’s much to my personal shame that I had never heard of Clarence Darrow before last Saturday night. Quite why there was a play written about him, a play starring Kevin Spacey no less, was entirely beyond me. Ignorance in this case turned out to be very much not bliss.

Directed by Thea Sharrock and with a cast of Kevin Spacey and absolutely no-one else, Clarence Darrow sees the titular American civil rights lawyer/giant/hero telling the story of his life and his most famous cases. A story which, frankly, should be much more widely known than it is. And not just by me. 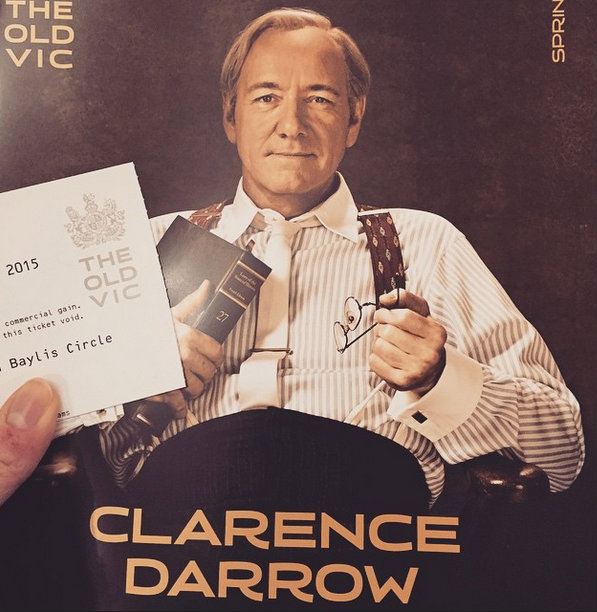 Having never seen a one man show before I wasn’t really sure what to expect. I suppose, to the extent that I had expectations, it was that it would be a long monologue with an interval. But that’s not what it was. Clarence Darrow is very much a play, it just happens to be a play with only one actor.

And there are multiple characters in this play too, it just happens that all but one of them are played by empty chairs. This dodgy sounding technique - made infamous by the clusterfuck that was Clint-Eastwood-meets-Barack-Obama at the Republican convention the other year - is so effectively done throughout the play. Thanks to Kevin Spacey’s extraordinary performance (yes I'm getting to that, hold your horses) we know exactly what these chair people are saying because of the way he reacts to them. He makes them into real people - which is just genius when you stop and think about it - and, by allowing the audience to use their imagination to fill in the gaps in his exchanges with them, gives these sequences a surprising emotional power too.

The example that stands out most strongly in my memory is when Darrow’s marriage collapses and the empty chair becomes the devastated wife that he’s leaving. I could describe to you exactly the way his wife lifted her tear filled eyes, raw with heartbreak and confusion, to watch as her husband walked away. But what I'm describing there is what was going on in my head whilst I watched a man walking away from an empty chair. I cried my little heart out for that chair; testament to the power of this production and Spacey’s performance in particular. (I hope the chair is ok.)

Now, I've been very lucky so far this year to have seen some outstanding performances in the shows I’ve seen (Ralph Fiennes in Man and Superman, Mark Strong in A View from the Bridge) but Kevin Spacey in Clarence Darrow blows them all out of the water. I could spend hours elucidating exactly why this is - all the tiny details that make you feel like he’s telling his story just to you even if you’re sitting in the cheap seats, the heart rending passion with which he delivers Darrow’s soaring speeches, the sheer energy of a performance that seems to never stop moving - but I won’t because you’d get bored and I've got shit to do. All I will say is this: it’s the most breathtakingly brilliant performance I've ever seen, from any actor, in any medium. And to be honest I think that anyone who’s seen this show and doesn't say exactly the same is either lying or an idiot. Probably both.

It helps that Spacey is given such rich material to work with. David W Rintels’ script is fantastic - fast paced, witty, emotive, passionate, sad and outraged all at exactly the right moments. The script includes several passages of verbatim quotes from Darrow’s incredible courtroom rhetoric which give the productive a real moral and emotional punch. I have never cried in the theatre the way I cried watching this show and it was these beautifully crafted, pleadingly passionate verbatim passages that set me off every time. The closing speech from the famous Leopold and Loeb trial, which is also the closing of the play, almost killed me and I make no apologies for quoting the bit with which I am now obsessed in all its glory:

I am pleading for the future; I am pleading for a time when hatred and cruelty will not control the hearts of men. When we can learn by reason and judgement and understanding and faith that all life is worth saving, and that mercy is the highest attribute of man. [Source]


There’s more that I could say about this superlative busting show - I haven’t even touched on the great set, the clever use of lighting and sound, the effective (much more effective than I was expecting) in the round staging - but having read that quote I’m about to start crying again and need to go and have a lie down. Suffice it to say it’s a privilege to have seen it.

Playing at the Old Vic until 11th April, unsurprisingly Clarence Darrow is sold out. I believe there are a (presumably very limited number of) day tickets and returns available though. Sell whatever possessions/property/family members you need to to get one.