Last week I had a genuinely nuts and exhausting week at work and so naturally decided that the best thing to do with my Thursday evening was to spend three hours watching Shakespeare.
The fact I managed to stay awake through the entirety of the RSC's production of Henry V, currently on at The Barbican, is probably the best review I can give it frankly. 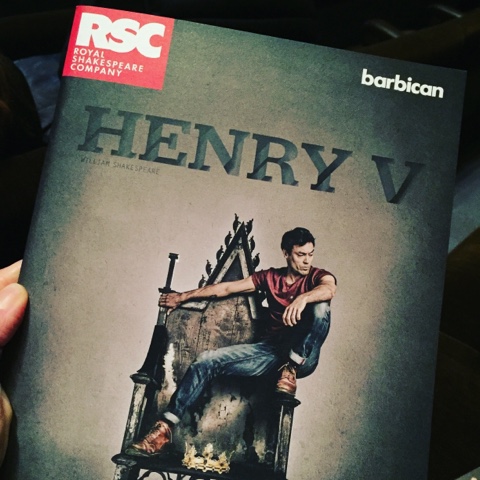 I can’t honestly claim that Henry V (the plot of which I’m not going to explain because, well, really?) is one of my favourite Shakespeare plays, though it is one of the ones I like to think I know reasonably well, but it is one of the ones I seem to see fairly regularly. I like it because it’s one of the plays that is most open to interpretation: is it pro-war, is it anti-war, is it (as the RSC’s excellent programme proposes) actually just concerned with going to war, is it something else entirely? Personally, I think a ‘going to war’ play is the best explanation of what Shakespeare was doing. And certainly the label applies well to this production, which has no political agenda beyond, I think, being a love letter to the craft and power of theatre.

Inevitably with this play the type of Henry you have is key to the type of production you’ll have. In this production it’s Alex Hassell, who was so impressive in the RSC’s Death of a Salesman and is even more impressive in this. Hassell is a great Henry and provides one of the more interesting takes on the character I’ve come across. I think in large part this is a consequence of the fact that he’s played the part in the full cycle of plays in which Henry appears. He has grown into the role of King Henry along with the character, and as a result his Henry is a fully realised, rounded and human King riddled with self doubt. He deals with the set piece speeches excellently (I loved the fact that ‘once more unto the breach’ wasn’t delivered as a set piece but as a battle cry literally on the run and ‘we few, we happy few’ was so much more touching in this nervous version) but is frankly even better at the ‘ordinary’ dialogue where he gets to be a human being. In a production which revels in the humour in its text, Hassell also turns out to be a superb, natural comedian. The final scenes, wooing the hesitant Princess in broken Frenglish, are perfectly pitched with a modern sensibility and disregard for the fourth wall which elevates this sequence from over-milked, anticlimactic afterthought to one of the highlights of the piece.

The other standout performance in this production is the mighty Oliver Ford Davies as the Chorus. Notwithstanding the fact that he is an utter ledge anyway, and I’ve always wanted to see him live, he speaks the verse better and clearer than almost anyone else I’ve ever heard. This is a self consciously theatrical show - the five minute call is broadcast into the auditorium as well as backstage, much of the mechanics of the set are left bare, Alex Hassell makes his first entrance out of character and out of costume - and it is the Chorus (in modern dress) who pulls this all together. I suppose when you’ve got an actor the calibre of OFD to play with it’s only natural to give him more space and time with his part than you might otherwise, but the increased emphasis on the Chorus and the intentional theatricality of this piece really works.

Speaking of the verse, which I did some sentences ago, it’s worth mentioning that it is immaculately spoken by everyone in this production. I’m no expert on iambic pentameter, I had to google how to spell it for a start, but I can’t remember the last time I heard Shakespeare spoken with such clarity - of both diction and meaning - and it really is joyous. Combined with stark and minimal staging, and some of the most beautiful lighting I’ve seen in the theatre of late, the result is a deceptively simple production that allows the verse and the acting to sing.

And it’s also worth mentioning that the one instance of literal singing, a haunting Te Deum for the war dead, is one of the most touching moments in this production. Music is used sparingly overall, and there’s certainly none of the battlefield action music that some productions emply, but when it is it’s so effective. The Te Deum was incredibly moving, well sang, and a lovely moment of (highly topical) breathing space in a busy play.
Overall then a big old hit for me. There are plenty of tickets left for the rest of the run so no excuses not to check it out.
Henry V is part of the RSC's King and Country season at the Barbican and runs on its own until December 30th and in the full cycle (with Richard II and Henry IV parts I and II) from January 12th.