You know those ‘if you’ve been affected by the issues in this programme...’ messages you get sometimes after particularly traumatic documentaries and/or episodes of Hollyoaks? Have you ever seen one in a theatre before?

I certainly hadn’t, until A Monster Calls at the Old Vic. I saw it in the ladies’ loos, pre-show, and I was confused.

Here’s the thing: I haven’t read the book A Monster Calls, by Patrick Ness, or seen the film (I didn’t even know there was a film). I didn’t know what it was about. I’d just seen the production images and thought it looked cool.

I was in no way emotionally prepared for what was to come over the next two and a half hours: having my emotions ripped out through my eye sockets and leaving the theatre a human puddle. I exaggerate, but only slightly. 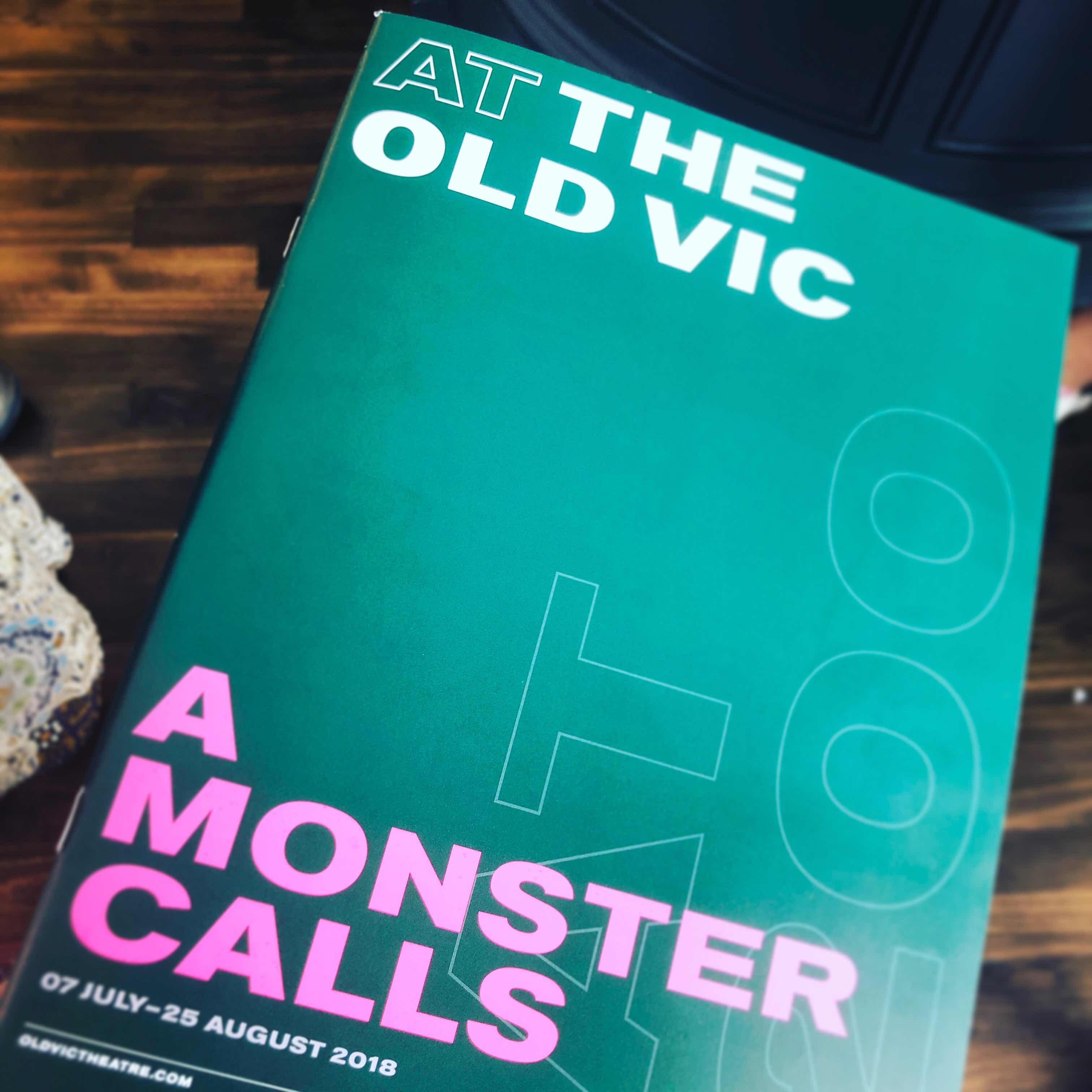 For those who, like me, don’t know A Monster Calls - and without giving everything away - it’s about a kid coming to terms with the fact that his mum has terminal cancer and, specifically, the complicated, horrible and human emotions that he has to process. It’s a play about death, why we’re scared of it, and why it’s ok to be scared of it. It is profoundly moving, phenomenally powerful and a fantastic choice for a theatrical litererary adaptation.

The particular version of the story on show in this production is unique. It’s a ‘devised’ production, drawn up over the course of the rehearsal period by director Sally Cookson, writer in the room (nope, me neither) Adam Peck, and the company. I don’t know if what they’ve created is faithful to Patrick Ness’ original prose - and neither do I especially care - but it is an absolutely beautiful, fresh and touching piece of writing. The emotional depths it reaches are astonishing, the characters it creates are sympathetic and complex, the way it revels in the power of story telling is a joy. Most of all, the way it approaches and examines its key themes - the mindfuck emotions involved in losing a loved one - is extraordinary. Softly, kindly, it pulls you towards its inevitable conclusion and holds your hand as it forces you to face up to, essentially, death. It’s as intricate and heartbreaking a study of grief as I’ve ever seen. And I know I cry at everything all the time, but Jesus Christ I CRIED at this. I cried, I reckon, for a full, uninterrupted half an hour of the second act and a few other bits as well. I cried until my eyes hurt, but my heart didn’t.

As well as the emotional power of the play, the production is heartstoppingly beautiful and almost unfathomably clever. This really could be an unstagable work but Sally Cookson’s production absolutely nails every last detail. She’s created a beautiful and unique (words I’m using a lot in this post, intentionally so) world and is totally committed to the story and her vision of it. Michael Vale’s set is astonishing and meets the key challenge of this piece - The Monster is literal, he has to actually appear - in such an innovative way. Using a set of ropes and pulleys to create the yew tree that The Monster inhabits, with cast members suspended in it as necessary, is genius. Matt Costain’s brilliant, occasionally Cirque du Soleil-esque, aerial work makes perfect use of it too. Set against Dick Straker’s beautiful, but also genuinely frightening, projection everything combines to create one of those theatrical images that will stay with me for a very, very long time.

Also of note is Aideen Malone’s lighting which is used so effectively to communicate place by casting the shapes of various different types of window onto the stage. Sounds weird, looks amazing. The production sounds amazing too, thanks largely to Benji Bowers’ incredible music and soundscape. That the lush, vivid, evocative wall of noise he creates is achieved by only two musicians (Bowers himself and brother Will) is kind of mind blowing.

This production is a real ensemble piece which I always find fascinating to watch; especially so in this case since the ensemble do so much to physically create the world of the show as well as just act in it. As the only actor who gets to do just one thing - play Conor, the kid at the heart of the story - Matthew Tennyson is brilliant, perfectly incapsulating the anger, sadness, guilt and fear that grief always comprises. Stuart Goodwin is a fantastically charismatic, comforting and threatening Monster. Marianne Oldham is heartbreaking as Conor’s mum - especially so given she has to drive so much of the narrative in relatively little stage time. But really it’s not the individual performances that make this show. It’s watching the whole cast very literally work together to create a world and tell a story that’s so thrilling.

At it’s very best, theatre can be both transformative and transport you to another world. A Monster Calls absolutely is and does both. I cried like a baby and marvelled at the theatre craft. I came away with a better understanding of grief than I think I’ve ever had and a deep thankfulness for a few hours spent thoroughly immersed in a story. In my glorious rule, this production will be available on the NHS.

Oh, and in case you thought I was joking... 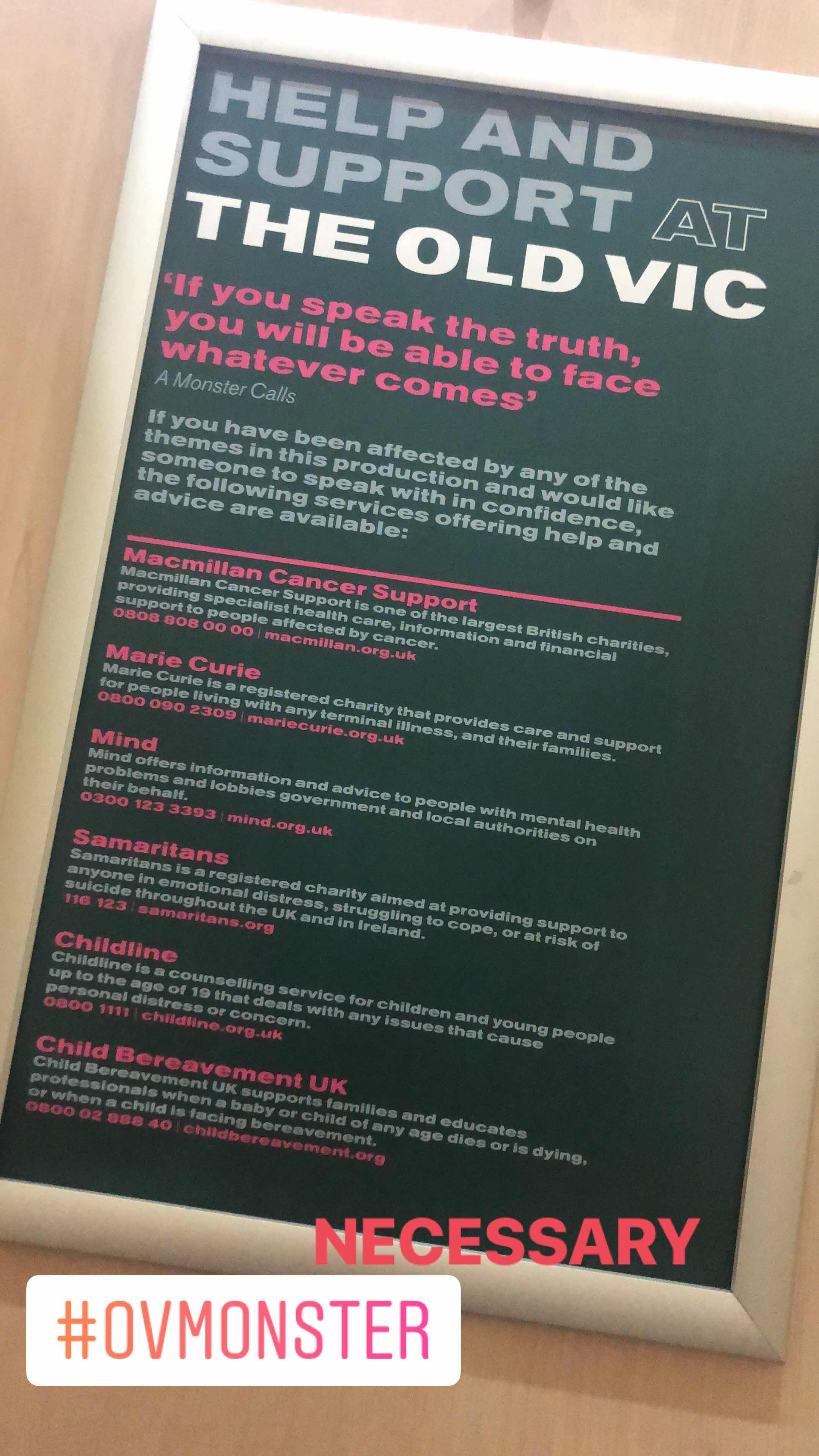 A Monster Calls is at the Old Vic until 25th August.

I sat in seat C31 in the Lilian Baylis Circle for this show and paid £5 (yes £5: FIVE POUNDS) for my completely unobstructed view seat at a preview performance. I challenge anyone to come up with a better way to spend a fiver in London this summer.