I've observed before that my motivations for seeing a particular show can sometimes be very complicated and sometimes very simple.  The inclusion of the line 'and a dead hedgehog' as an apparently key plot point in advertising blurb probably falls into both of those categories. Either way, it was precisely this that made me want to see Hedgehog. 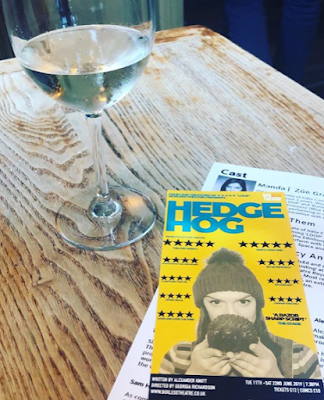 Written by Alexander Knott, Hedgehog tells the story of Manda, a young woman on the verge of adulthood on the cusp of the new millennium; her hopes, her fears, her creeping anxiety and, ultimately, her journey to self acceptance and perspective. And the key thing to know about it right off the bat is that it's a fantastic piece of writing. It's very funny, first of all, and captures the ridiculousness of teenage life brilliantly. It's not always an easy watch though, particularly the scenes where Manda's anxiety starts to consume her. It's touching too, especially in its portrayal of Manda's relationship with her dad. Most of all, though, it's breathtakingly relatable. Regardless of your gender, your geography or your upbringing there will be parts of this play that you recognise and that you feel speak only to you (which of course they don't). It's only very accomplished, perfectly constructed writing that does this, I find. And Hedgehog does it a lot.

It's also an exceptionally intelligent production. The child of Boxless Theatre, who specialise in fusing new writing with physical theatre, the piece is essentially a monologue blended with elements of dance and physical work largely provided by two supporting cast members who play every other character - aka Them. Under Georgia Richardson's direction, this works absolutely seamlessly. It looks gorgeous, it communicates both atmosphere and plot, and it technically totally succeeds, doing everything it needs to without ever pulling focus too far from the writing and the central performance. It's perfectly paced and exactly what both the script and the performers need by way of support.

The performers need very little by way of support, mind, because all three - Manda and Them x2 - are excellent. Zoe Grain as Manda is spectacularly good; like hands down one of the best performances I've seen all year in any theatre. It's hard to imagine this show working anywhere near as well without her energy, comic timing and head of a pin changes of tone. She's remarkable. Ample support comes from the endlessly watchable Emily Costello and Lucy Annable as the Thems. The former is especially good as a heartbroken young boy and a bitchy teenage Plastic (I think they call that range) and the latter with some of the more broadly comic parts. All three, Costello and Annable in particular, are step perfect on the more physical aspects of the show. And all three are an absolute joy to watch. Very much #SquadGoals.

Staged in a room above a (very nice) pub or otherwise, Hedgehog is definitely one of my favourite shows so far this year. The writing is brilliant, the production is brilliant and it is brilliantly performed. I would love it if it were picked up root and branched by someone like The Bush and given a chance to find a bigger audience at a theatre where you can't hear bar chatter through the floor. It certainly deserves that - and a lot more.

Hedgehog is at The Lion and Unicorn until the 22nd June.

My ticket for this one was kindly provided by the production. An unreserved seat would normally cost £12, which is a fucking huge bargain for the quality of the work.
Posted by Billi at 09:00