Every writer has their thing, or things in some cases. The random stuff and tiny details that they’re really good at. Like the Pinter Pause but less annoying.

Mike Bartlett has two I think: terrible dinner parties and just god awful men. He is really fucking good at writing both of these things. I do mean this as a compliment, even if it may not sound like one.

Both of these things are in evidence in Cock (stop snickering at the back), an early Bartlett currently being revived for the first time as part of the Chichester Festival Theatre season. Staged in the small Minerva theatre, it tells the story of John a hitherto definitively gay man with a partner he claims to love who also claims to fall in love with a woman. With him unable to decide between the two, a classic Bartlett dinner party from hell is arranged to basically pit them off against each other. 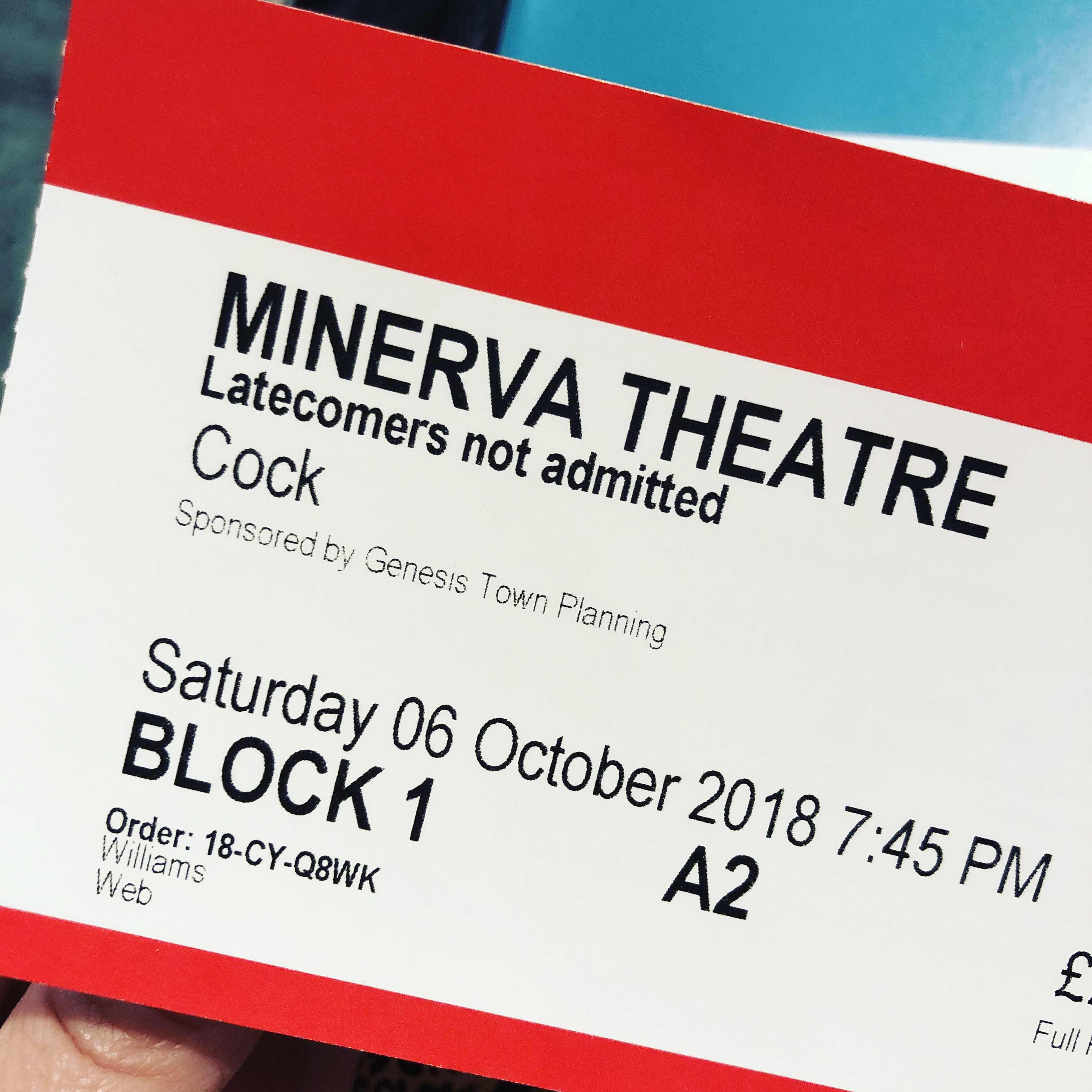 To be frank, this isn’t Bartlett’s best play, characteristic tropes aside. It’s discussion of sexuality and labels (John refuses to label himself as bisexual and is terrified of disowning the ‘gay’ label he’s felt is part of him for so long) is undoubtedly timely, but in a weird way the play suffers for it in that there are more insightful and sensitive pieces, fictional and not, easily available to anyone with access to the internet. The play was originally staged at The Royal Court and it does seem to fulfil my prejudice of what a Royal Court play is: not as clever as it thinks it is. See also: Bartlett’s insistence that his text is performed with no set, no props and no ‘mime’ (so when a character asks someone to pass the wine no one moves, for example) which works I would say 50% of the time, the other 50% just being distracting. (The no mime sex scene works oddly well though - just two people looking at each other, smiling and making happy sounds. It’s weirdly touching.)


There’s also an uncomfortable whiff of casual sexism running through parts of the play. I hated the constant repetition of the idea that one of the main appeals of the female love interest was babies. Like leave her womb out of it dickhead. The jokes about women looking manly (which seems to translate as tall and with big hands) wear quite thin after a while too, especially in a play otherwise so concerned with how arbitrary labels are. The female character generally feels underwritten. Though I don’t think it’s intentional, it feels more careless than anything, it’s still not really ok, for my money.

I also have an issue with the characterisation, one that I have had with Bartlett stuff before, in that every character in this play is some degree of awful. John, the central character, is the absolute worst. Borrowing from the Bartlett TV canon, he is Simon Foster but more manipulative; Duncan from Press but more of a twat. That bad. Which is sort of fine to an extent, except that we’re supposed to believe that two other human beings love him enough to fight over him. And that really stretches my willing suspension of disbelief to its limit.

All of that said though, Cock is an entertaining enough play. After all, no one writes conflict between terrible people better than Mike Bartlett. The action is non-stop. The dialogue is joyfully caustic, punchy and sad when it needs to be. The audience is never not engaged. It is very, very funny. I enjoyed it, even as I was irritated and underwhelmed by it.

A lot of that is down to a characteristically strong Chichester production. Helmed by Chichester newbie Kate Hewitt, the production is pacy and robust. She brings out the naturalism of the play nicely and balances some big performances really well. To be designer of a play which explicitly has no set and no props must be a fairly weird gig, but Georgia Lowe’s MMA ring of a design is a knockout (do they have knockouts in MMA? I don’t know). Guy Hoare’s red and white neon lighting is the perfectly harsh accompaniment. This play is written as a fight, and this production works literally and super effectively with that idea.

The cast of four work their arses off to absolutely sell it too. In a show performed in a small, bare room where all you can do is talk and move a bit, there’s nowhere to hide and the four actors assembled here fully embrace that and chuck themselves in without fear. Luke Thallon is as great a lead as his character, awful John, is terrible a human being. That I sympathised with John at all is 99% down to him. He brings a wonderfully understated physicality to the role, simpering smiles, quivering emotion and all. He is endlessly watchable and properly good when ragey. Matthew Needham is a perfect counterpoint to him as male love interest M (don’t even get me started). He gets the bulk of the comedy and relishes it in a catty, hyperactive but ultimately very lonely performance. They’re a supremely entertaining double act. Rounding out the quartet, Isabella Laughland is a ballsy and beguiling woman love interest (called only W, obviously) and, though his part is largely superfluous to any of the plot, Simon Chandler as M’s father F (seriously) does a lively and pleasingly oily job.

Overall, I was disappointed with Cock (not the first time I’ve said that). It’s by no means classic Mike Bartlett, even if it does have the key features, and doesn’t have as much to say as I expected. That said, it’s still great fun and, for connoisseurs of supreme social awkwardness in particular, a decently entertaining hour and a half. The cast and the production do much to elevate it too.

Cock is in the Minerva at Chichester until 27th October.