In the long, long, loooooooooooooooooooooooooooong list of things that are awful in the world in 2019 I think we can all agree that the treatment of immigrants and refugees in the USA (and more or less everywhere else for that matter) is somewhere near the top. It's certainly one of those issues that I get super angry about. And hell, if you're not angry about it then you don't understand it. Like, they're literally keeping kids in cages. 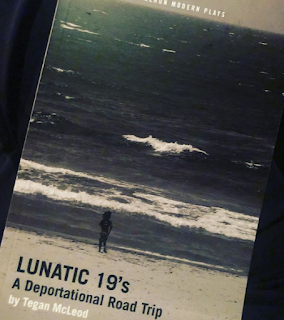 On the grounds that theatre should reflect on things that are terrible in the world, then, I was pretty excited to see my first play about this general shit show; Lunatic 19's - A Deportational Road Trip at The Finborough Theatre (great pub theatre over a fun pub, even if their house white tastes mildly like paint thinner). First of all, no that apostrophe is not a typo. That's how it's written. Second of all, this is not the hard hitting, punchy commentary that I was hoping for. In fact I think, as a play, it's pretty thin.

Lunatic 19's tells the story of Gracie, an undocumented migrant worker who's just been involved in a serious car crash but is tracked down in the hospital by immigration officer Alec, tasked with deporting her back to Mexico, a country she was last in when she was five. Along the way, prisoner and jailer get emotionally involved and the power structures shift in unexpected (and for me entirely implausible) ways. To be fair to playwright Tegan McLeod, I can see what she was trying to do here. Because this play is undoubtedly a different angle on the immigration topic in some senses and I can see why that's an appealing idea. I can also see the appeal of writing an immigration play where the power is at least temporarily handed back to the (Latina, female) immigrant. However, there are ways of achieving this with a much tighter and more plausible plot than what we have here. Willing suspension of disbelief notwithstanding, too much happens in this play that I just didn't believe. For the sake of not spoilering the play I won't set any of them out here, but I will just pose the question of how easy it really is to remove a neck brace that's screwed into your own skull without, like, dying.

I also found the emotional entanglement of Alec and Gracie a bit of an issue. I completely get what McLeod is getting at (that, actually, there are human stories on both sides of this debate) but I'm not sure that this idea is best expressed as it is here. Sometimes it works, sometimes it doesn't. The final scenes, which includes a fairly odd and flat (and thankfully short) sex scene, fit into the latter.

That said, I didn't hate Lunatic 19's. It does have a lot to say about its subject matter and it has some really strong moments and strong writing, particularly in the first half. The parts where it is a straightforward 'this system is an inhumane aberration' polemic are very strong. The fact that everything that happens to Gracie happens because she once returned a rental car late is so ridiculous as to be entirely plausible. The horrible, hard to watch details of her deportation are true to life and it's important to see them acted out like this with no flinching. And, reservations above aside, it is good to see that Alec gets to be a proper character and not just a caricature whilst Gracie is a bit of a badass and defiantly (also not a typo) not a victim.

If the play isn't 100% for me, the production is much stronger. Director Jonathan Martin's vision for this piece is crystal clear and delivered really well. Carla Goodman's design is the absolute highlight, especially the way it uses Kevin Treacy's excellent lighting as, basically, all the sets. It's a taught 90 minute affair which keeps up its momentum really well.

The cast of two work really hard and there's certainly no question about their commitment to the piece. Gabriela Garcia is a wonderfully physical Gracie with real attitude. Occasionally it feels a bit like she's doing an impression of Jodie Comer in Killing Eve, but generally she brings something really fun to the part. Devon Anderson has a harder job as Alec, both in terms of generating sympathy and also because his material is less good. But he works it hard and delivers something complex, intense and watchable.

Overall, Lunatic 19's wasn't really for me. I feel like the play probably needed another couple of workshops to be honest, as much as I sympathise with the point it's trying to make. It's a great little production though.

Lunatic 19's is at The Finborough Theatre until 3rd August.

My ticket for this one was kindly provided by the production and would normally cost £18 for an unreserved seat.
Posted by Billi at 12:30