Unbelievably in about twenty years of regular to obsessive theatre going I have never seen a Noel Coward play. Not through any particular ill will towards the legendary playwright. I've just never got round to it somehow. And if you're going to pop such a big theatrical cherry after so long, you may as well do it in spectacular style. 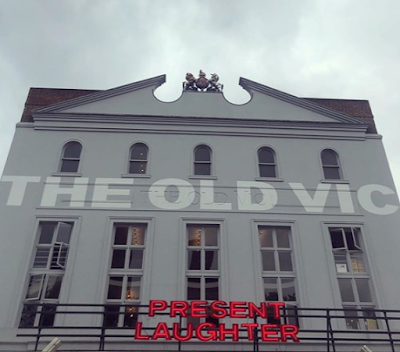 The Old Vic's new production of Coward's Present Laughter fits that bill perfectly. Let's not fuck around here: Matthew Warchus' updated version of this play is an absolute triumph. To rip off one of my favourite Blackadder Goes Forth quotes, it's a twelve story triumph with a magnificent entrance hall, carpeting throughout, twenty four hour portage and a large sign on the roof saying 'this is a triumph'. I liked it, is what I'm saying.

Present Laughter is essentially a farce. It deals with the perils of fame (that summer 2019 theatrical mini-trend I've mentioned before), specifically extreme fame that comes with an obsessive fandom. It is hilariously funny, both in its writing and in the supremely elegant staging of this production (which I'll come to) in a way that makes your face ache and your soul feel lighter. But at the heart of this light, fluffy, hilarious thing is something far darker which gives it an edge that I enjoyed. Because it's also a play about loneliness, about sexual desire and about the costs that fame exacts - of everyone involved. All good comedy has a dark side, I think, and this play has a really juicy, impeccably timely, one.

The writing, as I've mentioned, is everything I hoped my first Coward would be: catty and campy but truthful and complex too. It's hilarious, until it needs not to be. I could quote it endlessly, but I'll spare you. The characters are all great (which is to say they're all awful) and the gender swap that this production includes, which makes one of the male lead character's love interests same sex, is seamless to the extent that I think you could easily not know there even was one. I don't know that the text has been updated much more than that, but the play feels so modern and relevant. I'd believe you if you told me it was written yesterday.

Away from the script, Matthew Warchus' production excels in every way. Poorly staged farce is amongst the most unwatchable theatre in existence but expertly staged farce like this is an absolute gift. It's directed with pace and exquisite timing. With the gender swap and allowing space for the darkness of this play to intrude liberally, Warchus' bang up to date vision for the play is beautifully realised. Rob Howell's design is an art deco stunner with gorgeous curves and pops of colour everywhere. The whole play is done on one set and it works so well. It's expertly crafted to make the farce work too (by which I mean there are lots of doors and props for people to throw around, all within reach of the main action). Simon Baker's sound is pleasingly boisterous and if there must be a blacked out pause in the action between scenes - the only thing which just grated on my nerves ever so slightly in this show - then the loud selection of absolute bangers selected to provide some musical cover is top drawer. +10 points for swing Britney for a start. Tim Lutkin and Hugh Vanstone's lighting is also really effective. Their evocation of the passage of time in particular is beautifully done.

All that said, I feel like any production, no matter how good, of this play rests on the choice of actor to play the lead role; just slightly beginning to fade leading man Garry Essendine. But this production has Andrew Scott, so that's not a problem. Scott is on sublime form here. His comedy timing is astonishing, his delivery of the frankly insane amount of lines he has never less than perfect, and he can conjure pathos and sympathy out of apparently nothing. He is utterly hilarious and joyously good at the farcey stuff but subtly sad in the darker moments too. His performance is worth the price of a ticket and, to him, surely worth some clutter for the mantelpiece come awards season. I've seen few better this year. Also it's pleasingly meta to have someone who's so caught up in the fandom culture (Sherlock, Fleabag etc) playing this role. I suspect it's not accidental.

This cast has strength in depth too and there's some great work elsewhere on the stage. Sophie Thompson (long the superior Thompson sister for my money) frankly appears to be having far too much fun as Garry's long suffering secretary. She's an absolute hoot every time she's on the stage. Indira Varma is breezily excellent as Garry's estranged wife, and really turns up the emotional heat when required. Luke Thallon is fantastic as Garry's obsessive fan, all happy, innocent psychosis. As the aforementioned gender swapped male love interest, Enzo Cilenti is deliciously creepy, slinking around the stage (and around Garry) like some kind of over stimulated panther. Is a good group, in other words. Squad goals.

I bloody loved Present Laughter, in short. It's such a relevant, modern production of a just very fucking funny play (with an edge) which the whole cast - but Andrew Scott in particular - acts the arse off of. More to the point, I can't remember the last time I laughed so much in a theatre. And really what more can you want given the state of, well, everything at the moment than that?

Present Laughter is at The Old Vic until 10th August.

I sat in A6 in the Lilian Baylis Circle for this one, for which I paid £21. I think I've mentioned before how much I love seats in the front row of the LB - slightly restricted by a safety rail but otherwise brilliant value.
Posted by Billi at 09:30