Sometimes all it takes is the poster for a show for me to be able to think without a shadow of a doubt 'yes, that is for me'.

As wrong as it may be to judge a book by its cover, my theatrical gut is rarely wrong (let's not talk about The Entertainer). As soon as I saw the poster for the NT's new production of Amadeus I knew I was going to love it. And I was 100% correct to think that. 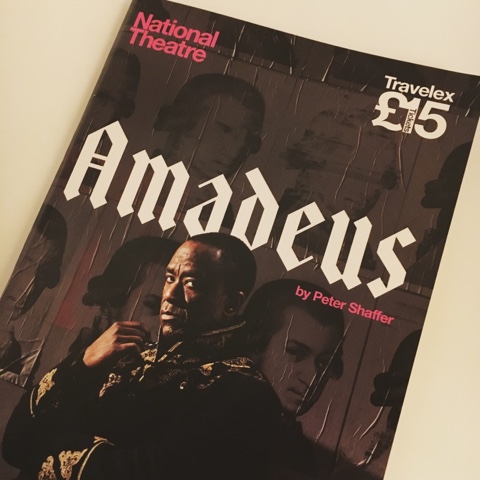 There were two things that immediately jumped out of me from the poster (come-programme cover) that inspired my certainty. The first, and the most obvious, was the play itself. As everyone and their dog knows at this point, Peter Shaffer's work of beauty tells the story of the intense rivalry of the darling of Viennese court music, Antonio Salieri, and the brash new kid on the block, Wolfgang Amadeus Mozart. It's been an award winning play, an Oscar winning film and is by now such a well known story that even The Simpsons has spoofed it (Magical History Tour - Lisa and Bart perfectly cast as Salieri and Mozart respectively). But I'd never seen it, other than in Simpsons form, and had always wanted to.

I was not disappointed. Not even a little bit. I love this play so much. Shaffer's writing is utterly lush, especially the passages that Salieri has talking about the beauty of music which spoke to a bit of my personality that hasn't been spoken to since I gave up all involvement in performing music over a decade ago. But his writing is also funny and sparky, and his characterisations rich and enlightening. Again, it's Salieri who gets the best deal here and his progression into the bitter and devious man he has become by the end of act two, throwing off all of his tortured appeals to his better nature from earlier points in the play, is thrilling to watch. Especially, of course, if you're watching a great actor portray it.

Which brings me to the second thing on that poster which gave me certainty I would love this production: the presence, as Salieri, of Lucian Msamati. In the past eighteen months or so I've seen Msamati in three things and I'm now at the point where I feel comfortable saying that I LOVE THIS MAN A LOT. Like, I would pay money to watch him read the phone book out loud sort of love. He was great earlier this year in Ma Rainey's Black Bottom, he was breath taking last year in the RSC's Othello (making history all over the place as their first black Iago) and he is a minor force of nature in Amadeus.

Salieri is a huge part; barely off stage for a scene, working as both narrator and main character and across two time periods. The energy with which Msamati attacks all of these challenges is as infectious as it is effective, and seemingly effortless. His emotional depth is stunning, his comic timing is spot on and those afore mentioned passages about the beauty of music? Look, I wasn't crying it was just raining on my face. It's a near faultless performance that I would gladly sit through again and again. If Msamati doesn't make an appearance in my rapidly approaching 2016 bets performances post I'll be amazed.

There is so much more to love in this production than what is on the poster though. And one of the biggest things on that list is the presence of a real life, live orchestra and legit opera singers in the cast. Seriously, whoever thought to bring in the excellent Southbank Sinfonia and use them as effectively another character in the play deserves some kind of award. It's a masterstroke. It works so well, and really hammers home the fact that music is just a great thing. The staging is interesting too, tapping into the trend for overt theatricality with its open backed set and exposed backstage area. Given the overt theatricality of this play and its themes, this staging works and doesn't feel forced (though the orchestra packing up and getting their coats on at the end was probably pushing it a bit but then perhaps they're all reliant on Southern Trains to get home so needed to make a quick getaway). The Olivier's revolve is also cleverly used to give the otherwise quite minimalist setting some depth, literally and metaphorically speaking. It's conversion into an orchestra pit was particularly good.

In case you've not noticed, I loved this production and really can't recommend it enough. It's ine of the best things I've seen this year and frankly I feel sorry for people who don't get to see it. Tickets are currently scarce, but another lot is due to go on sale soon. Take advantage or be an idiot.

Amadeus is in the Olivier Theatre at the NT until 2nd February, with further dates to be announced. It gets the NT Live treatment on 2nd Feb too.
Posted by Billi at 18:00