Theatre Review: The Tragedy of King Richard the Second

High on the list of phrases that are likely to make me instantly book tickets to see a show is ‘starring Simon Russell Beale’. If this is preceded somewhere in the advertising blurb by the phrase ‘by William Shakespeare’ then more’s the better. Two of my absolute favourite humans, present and past, the combination seldom fails to deliver.

Currently my favourite partnership is at work in The Tragedy of Kind Richard the Second (or Richard II if you prefer, and as the person typing this I very much do) at The Almeida. A story of a country divided, ruled by weak leaders and people who’s ambition and personality outstrips their ability by several miles, it could not be a more timely choice for a revival. All that’s missing is some leopard print shoes and a twat in double breasted pinstripe. 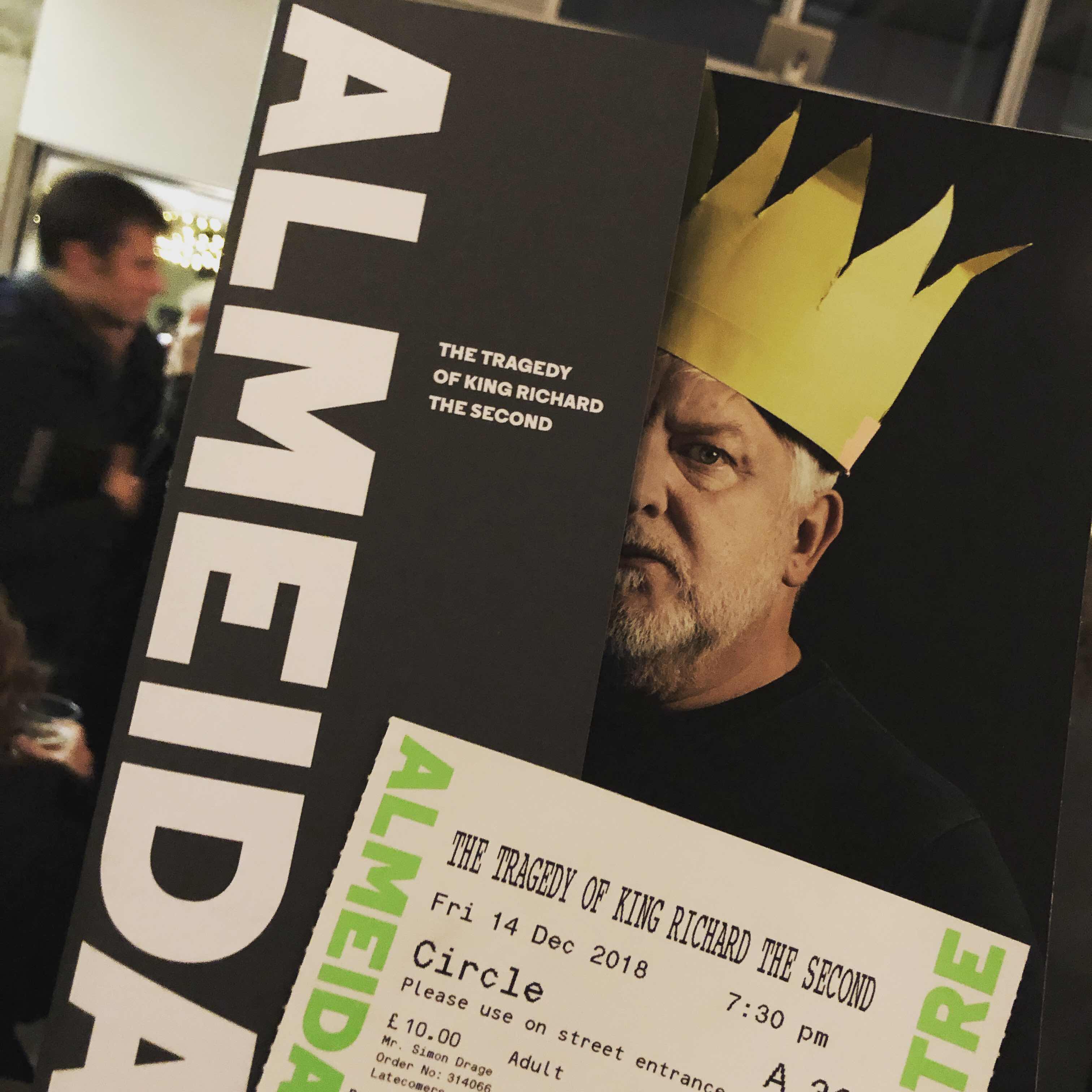 Richard II isn’t a play I know well, but even I can pick up that this is a very particular version for this production. The timeline is chopped and changed and there is a heavy emphasis on rhyming couplets which I rather suspect is not so in more traditional productions and versions of the text. For me as a stranger to the play I did find bits of it quite hard to follow as a result and though the rhyming gives the piece pace it also makes it feel a bit, well, panto. If you’re an RII fan though, fear not: the classic bits of text (the ones even I recognise) are all present and correct and untampered with. As far as I can tell, anyway.

Some of the quirks of this production become instantly more understandable once you know that Joe Hill-Gibbons is directing. I am, broadly, a fan of Hill-Gibbons’ work. I like that he is unashamedly modern, not afraid to experiment and, most of all, that he always has a clear and distinct vision for his productions. He also isn’t easy to define by one style or show off-y trick. His vision is very much in evidence here and the resulting production, reservations about some of the textual changes aside, is unique, punchy and a lot more fun than I suspect this play usually is.

There are moments when things start to feel ominously like a poor man’s Ivo van Hove (I won’t spoil anything, but keep an eye on the buckets) but actually the overall mood of this production - sparse and threatening, but still irreverent and slightly tongue in cheek - works. It’s helped a lot by a strong, bleak and ballsy design by ULTZ’s which is a great canvass, and a great salesperson (salesthing?), for the rest of the production. It took me a while to make my mind up, but ultimately I did rate the technical bits and pieces of this production a lot. I also rated the fact that it didn’t overplay its topicality card, even if I would have given Richard a pair of leopard print trainers if I’d done the costumes. This is, mercifully, not William Shakespeare’s Brexit: The Play.

One thing I had no doubt about from curtain up to curtain down was the casting decisions made here. First of all, credit to Hill-Gibbons for casting an older Richard against a younger Bolingbroke. Richard II is so often the play where a young up and comer gets to make their Shakespearean name. As accurate to the character as that may be, I really enjoyed the shift in the dynamics of the play that having an older King Richard versus a young upstart rebel Bolingbroke brought about. Quite apart from the resulting actor, it gave the play a type of depth and poignancy that I really hadn’t expected.

That that ‘resulting actor’ is Simon Russell Beale is what really gives this production its wings. SRB is obviously a joy of an actor to watch do anything, but his Shakespeare isn’t just anything. It’s very much something. His performance here is majestic. He nails RII completely, with exactly the right mixture of divine right vanity and human vulnerability. The result is someone surprisingly sympathetic and empathetic too. I sort of wanted him to win in the end. As Bolingbroke, Leo Bill also turns in a strong performance. He brings an unexpected and altogether believable nervousness to the young man who would be king as well as a clarity of both belief and purpose. The scenes where these two battle it out, often physically stalking each other around the stage, are by far the best of the night.

Perhaps this version of Richard II isn’t the best telling of the story - and in truth I don’t the play well enough to say either way, only that it wasn’t as narratively clear as other Shakespeare I’ve seen - but it is certainly a distinct, innovative and raw telling. It’s always entertaining, and the quality of the acting shines through every moment. Worth your time.

The Tragedy of King Richard the Second is at The Almeida until February 2nd.

I sat in seat A33 in the circle for this one, which is justifiably sold as restricted view - a good third of the back of the stage is invisible even if you lean forward. It cost £10, for a preview showing.
Posted by Billi at 09:30