Sometimes there are all kinds of profound reasons why you want to see a show. Sometimes you just want to sit in the warm with a big glass of red wine and stare at Rupert Graves for a couple of hours. Both of these are equally valid.

No prizes for guessing that it was very much the second reason that found me back at the Harold Pinter Theatre for Pinter 5 last night. Pinter 5, that is, that plays once more before closing. So let’s make this snappy shall we? 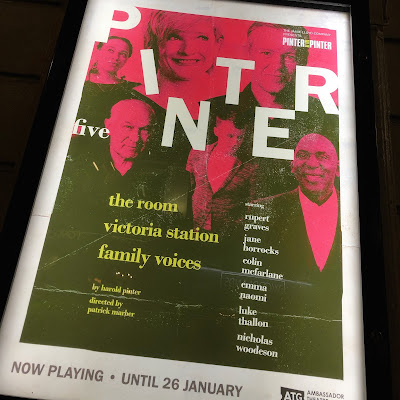 Pinter 5 is directed by Patrick Marber and made up of three pieces: short play The Room, comedy sketch Victoria Station and Family Voices another, shorter, play.

For me, The Room was by far the least enjoyable. It is exactly what I always thought Pinter was, and exactly why I’d never been to any of his work before this season: pretentious, bleak, slow, impenetrable, paus-y. I can’t even tell you what the plot was because I don’t know. Something about how we don’t communicate maybe? Genuinely not sure. It is, though, immaculately acted - a theme of the night - by the reliably excellent Jane Horrocks and a extremely powerful, if underused, Rupert Graves. Shout out too to fight director Kate Waters for her truly brutal sequence. Not for me, but not unwatchable.

The Room is the entirety of the first act of the production. After the interval things perk up considerably. Victoria Station is admittedly rather slight but it’s fantastically done. A very funny piece of writing that looks great - such a clever use of Soutra Gilmour’s otherwise domestic revolving set and Richard Howell’s lighting - and is performed brilliantly. It’s a two hander, pitting an effortlessly brilliant Graves (like honestly, it looked to me like I was expending more energy sitting in the audience than he was on the stage) against a joyously exasperated Colin McFarlane. It’s a hugely entertaining - and, thanks to Graves, surprisingly affecting - little thing that I really enjoyed.

Family Voices switches the tone back to black but is a gorgeously sad piece of writing (with an actual, comprehensible set up). It features the performance of the evening from Luke Thallon who effectively plays six characters, by my count, with distinct personalities, voices and mannerisms. Five of these are essentially comedy parts, the sixth - and main - is the big meaty emotional one, and he’s great at them all. It’s a fantastically compelling piece of work, backed up by a tremendously sad and bitter Horrocks and an all too brief, though brilliantly charismatic, cameo from Graves.

Overall, I enjoyed Pinter 5. The quality of work after the interval more than made up for the tedium of the first piece, and it’s never less than brilliantly acted. Worth a look, if you happen to be free on Saturday afternoon.

There’s one more performance of Pinter 5, at The Harold Pinter Theatre, on Saturday 26th January at 2:30. There are tickets.

I sat in seat T1 in the stalls for this (good view, good legroom, annoyingly close to a door onto the street so take your Pinter with a side of central London street noise) which cost £28 via TodayTix.
Posted by Billi at 22:46