Soundtrack to the week
Like pretty much everyone else in the world I'm currently obsessing over Lady Gaga's new album 'Born This Way'. It's so, so good. So good. It's rare that I'll say that an album has no filler but literally every song on Born This Way has me hooked. Edge of Glory is my personal favourite track.

Worth-every-penny splurge of the week
My new Gold Series GHDs were by no means cheap but my god they're money well spent. GHDs have always been the daddy of hair straighteners and the Gold Series is the best I've used. The plates glide through your hair so easily and leave hair silky smooth. I can't stop touching mine. It's becoming a bit of an issue. At about £120 a pair they made for one very expensive lunch hour, but for the effect - and on a cost per use basis! - they're completely 100% worth it.

Guilty pleasure of the week
I'm not a particular fan of Jersey Shore. I can't stand The Only Way is Essex. So my viewing of Geordie Shore on MTV last night was only exploratory. In theory. In fact I love the show. For those unaware of the concept eight (four girls, four guys) young, good looking, incredibly shallow Geordies are put in a stupidly nice house with a fridge full of booze and draws full of condoms and, essentially, left to their own devices. Hilarity ensues. And/or all hell breaks loose. It's hard to tell the difference. It's not big, it's not clever but it is entertaining. Trashy, but entertaining.

Some early thoughts: Greg and Vicky are my favourites, Vicky should get with Greg not Jay, Jay's eyebrows are weird and 'a million and ten per cent' is a wicked catchphrase.

Girl crush of the week
Michelle Obama. With the state visit happening at the moment the Obamas are all over the news. This pleases me intensely. Now, y'know, Barack is pretty cool but Michelle is just amaze, as the kids would say. I've always had a soft spot for her but this developed into full on girl crush thanks to the incredible white Tom Ford gown she wore to the state banquet. Oh. Em. Gee.

Shoes of the week
I love Schuh. It's just the best shoe shop out there, especially their web shopping. I particularly love their great range of cute kitten heels which, not being much cop at walking in anything higher, are my go to work/occasion shoe style. My most recent acquisitions are another pair - I already have them in black glitter! - of their Clara courts. And they're ace. 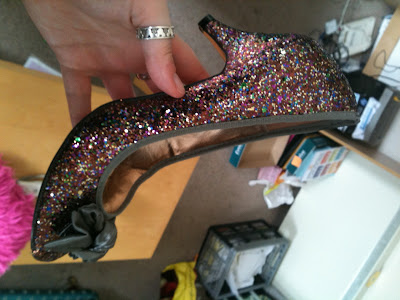 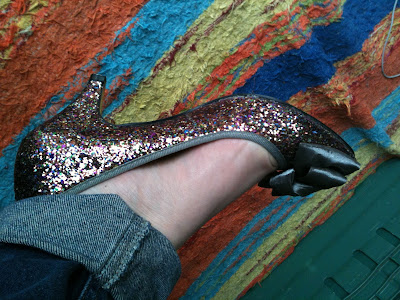