Never has a year needed theatre more than the clusterfuck that has been 2016.

I mean Jesus Christ what a shower. Where do you even start, or indeed finish, on the list of terrible things that have happened? The election of the world’s most unpresidented man as the most powerful man in the world is surely the highlight but the rest of the list is far too long to even embark on. So let’s not. Let’s go for a happier list.

Perhaps it’s a reaction to 2016, but there are an unusually high number of upbeat musicals in my top 10 this year. There’s also a pleasing amount of heavyweight drama, enough to make me feel culturally superior in a deeply snobbish way. 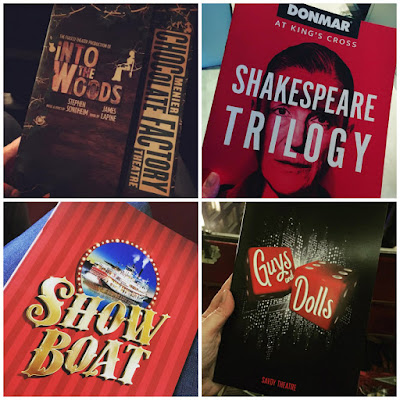 Into the Woods
Fiasco/Menier Chocolate Factory
Genuinely unlike anything I’ve ever seen before, and quite possibly unlike anything I’ll see again, there is no end to the love I have for this production. And indeed this company. Probably the thing I loved most, quite apart from the extraordinary talent of the cast and their beautiful interpretation of one of Sondheim’s lushest scores, was the joy that oozed from every cast member and every moment of the show. The perfect antidote to 2016.

Shakespeare Trilogy
Donmar Warehouse
Staying with the theme of uniqueness, I have never seen clearer or more revelatory productions of Shakespeare. The setting of the three chosen plays in a women’s prison, framing the stories within the semi-fictional life stories of the prisoners was a masterstroke that clarified the text and key themes so well. One of those productions that can genuinely be described as an experience, and a privilege to have seen.

Show Boat
Sheffield Crucible/West End
No particular prizes for uniqueness here, other than the sheer quality of this utter babe of a production. Looked stunning, sounded stunning, a superlative cast and a knockout score played perfectly. Joyous.

Guys and Dolls
Chichester Festival Theatre/West End
This was the first thing I saw this year and, evidently, has hardly been bettered. Again, a tremendous production of a killer show with a fantastic cast. The choreography gets a special mention too, the presence of Carlos Acosta as a choreographer was certainly not wasted. And Sit Down You’re Rocking the Boat was perfect.

The Deep Blue Sea
National Theatre
At the less happy clappy end of the scale but no less enjoyable for that. A dream cast delivering an acting masterclass on a set that could’ve walked straight off a film and a play that I loved a lot. Such a powerful, sad but ultimately affirming production. The pick of a reasonably strong year at the NT too.

Groundhog Day
Old Vic
Fair to say I was sceptical about this one but my goodness what a lovely surprise. The genius of Tim Minchin’s music and another knockout cast won me over totally, along with innovative staging and a general air of irreverent fun. Will surely blow everyone away when it transfers to Broadway next year.

Young Chekhov
Chichester Festival Theatre/National Theatre
Another trilogy, another triumph. Superbly acted across the board with an extra star in the incredible, beautiful set. Who knew the Olivier stage could be a lake? As a non-Chekhovian I really went to see these productions because I felt I should, not because I wanted to. It was an exceptionally nice surprise to enjoy them so much.

Amadeus
National Theatre
An absolute joy of a production, and a fitting love letter to the power and joy of music. Whoever decided to do the whole thing with a live orchestra, the exceptional Southbank Sinfonia, should also get some kind of small award.

The Intelligent Homosexual’s Guide to Capitalism and Socialism with a Key to the Scriptures, or iHo
Hampstead Theatre
Included not only because I love the title, this was a funny, touching, real production that was deeply affecting and fantastically staged. I never expected to enjoy a play where so many people spent so much time speaking over each other could work so well.

Les Blancs
National Theatre
Yael Farber’s NT directorial debut was a stunner. A depressing stunner, but a stunner nonetheless. Perhaps depressing is the wrong word. Moving is probably what I mean. Another great example of what can be achieved by an innovative design on the Olivier stage too.